Following quiz provides Multiple Choice Questions (MCQs) related to Symbol Sequence. You will have to read all the given answers and click over the correct answer. If you are not sure about the answer then you can check the answer using Show Answer button. You can use Next Quiz button to check new set of questions in the quiz.

Q 1 - Which figure is opposite to

From figures (iii) and (iv), it is clear that

will lie on adjacent face of

must lie opposite to it.

Which symbol will appear in place of (?)?

From the figure it is clear that symbol `σ’ will have ∂,μ,δ, and π on its adjacent surface which indicates that face with `ε′ will be opposite to it. By completing the unfold figure, the symbol which should come in place of `?’ can be found. 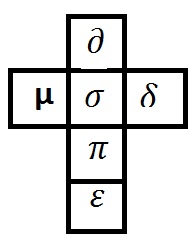 The symbol on the opposite face of circle is

From the unfold figure of dice, it can be easily concluded that plus will be at the back side of dice. 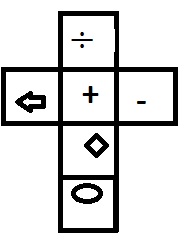 In the question figure, the views of a dice having faces with letters.

Q 4 - Which vowel has its opposite face as a consonant letter?

As `A’ and `I’ are opposite vowel letters it can be said that `E’ will have a consonant letter on its opposite face.

Three view of a dice has been shown in the following figures.

Which two pairs of letters are not visible in the figure (ii)?

From the unfold figure, we can conclude that `cc’ and `ss’ are on opposite face because of `bb’ and `aa’ being invisible in figure (ii).

Which combination of figures are adjacent to

D - None of these

From the unfold figure, it is clear that

is opposite to it and cannot form pair of adjacent face with any other figure.

Which pair of figure have same set of adjacent figure?

From the figures (i) and (ii), it is clear that

is on opposite face of

must lie opposite to each other. Hence all opposite faces are adjacent to same set of figure.

Opposite face of 6 contains which number?

From the question figure of dice it is clear that 1, 2, 3, and 5 will on adjacent face of 4 hence 4 must be opposite to 6 and vice-versa.

Q 9 - Which figure will represent the question figure?

From the folded figure of unfolded dice, it is clear that figure (c) will represent the question figure.

On the six faces of dice, various figures have been made which are triangle, rectangle, square, circle, pentagon and hexagon respectively accordingly to the following statements.

(i) Triangle is not on the opposite face of pentagon.

(ii) Rectangle and square are not adjacent to each other.

(iii) Pentagon is adjacent to hexagon, square, and rectangle.

Q 10 - Beside hexagon, square, and rectangle, which figure is also adjacent to pentagon?

From the unfold figure of dice, it s concluded that triangle is adjacent to pentagon. 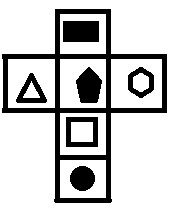