The questions on logical sense test or direction sense test are designed to examine the candidate’s ability to sense direction by using pen and paper. In these types of questions normally there is data given about a person who is travelling in different directions and finally we have to calculate either the total distance travelled by the person or distance between final and initial position or the direction of the person from his initial position. 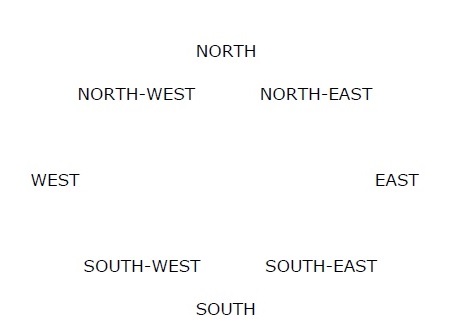 Explanation − The distance between Krishna’s house and the market place can be found out by using Pythagoras theorem 82 + 62 = 102. The direction in which Krishna is standing is south-west direction from his home. First he cycled towards north for 10 km and he turned towards his left-hand side and after that he turned his left-hand side and walked for 18 km. so finally he is in south-west direction because by walking 18 km he has surpassed his 10 km. So the correct answer is option C.

Question 3 − Pirnakanti walks 500 m to east and reaches Lata’s house. From there she walks towards north for 1000 m to reach his gym. His gym is in which direction of his home and what is the total distance travelled by Pirnakanti?

Question 4 − Salim started to move in the direction of west in an open field and stopped after moving 5km. Now he turned to his left-hand side and moved 15 km. How much minimum distance he has to cover to reach his starting point?

Explanation − Here we have to apply the Pythagoras theorem to get the answer. We will take square of each number i.e. 5 and 15. The square of both the numbers are 25 and 225 respectively. We will add them and result of addition is 250. Finally we will take the square root of the number and the final result is 15.08km. So the minimum distance here is 15km. Hence the option D is correct.