Following quiz provides Multiple Choice Questions (MCQs) related to Puzzles. You will have to read all the given answers and click over the correct answer. If you are not sure about the answer then you can check the answer using Show Answer button. You can use Next Quiz button to check new set of questions in the quiz.

Six students waiting for their school bus at the bus stop facing north. Their names are Dibya, Rohan, Bipasha, Prabhu, Madhav and Rupali. They are sitting at the bus stop facing north. The name sequence mentioned need not be the exact that they are seated. Dibya is third to the right of Madhav. There is only one person in between Rohan and Rupali. Rupali is not at extreme. Bipasha is to the immediate right of Dibya.

Q 1 - If Rohan and Rupali interchange their places then who will be second to the left of Dibya?

If we analyse the data given in the question, then we can get that the sequence is: Rohan – Madhav – Rupali – Prabhu – Dibya – Bipasha.

Rupali will be second to the left of Dibya, hence, option A is correct.

There are seven friends whose name are Jugal, Ram, Raj, Kris, Sila, Jon and Jenny. They live in different cities in India and all work in a leading public sector bank. They live in Mumbai, Bhubaneswar, Jaipur, Kanpur, Shimla, Agartala and Kolkata not necessarily in the same order. They like different colours and the colours are blue, red, green, yellow, pink, black and brown.

Q 2 - If Jenny and Sila will interchange their living places then who will stay in Agartala?

D - None of the above

If we look at the question and analyse the data, then we can find that −

As Jenny was living in Agartala, after interchanging, Sila will be in Agartala. So, option B is correct.

There are eight friends in a school named Adarsha Bidya Mandira and their names are O, P, S, T, R, Q, N and M. M, N, O and P sit in row I and face south. Similarly Q, R, S and T sit on row II and face north. So all the students face each other in the arrangement. M sits at one of the end. O is second to the left of M. Q faces O. R is not at one end. M does not face T. R does not face N.

The arrangement is as follows −

R sits between S and Q. Hence, option B is correct.

There are five friends out of whom two are females. They are Sita, Roshan, Manish, Reema, and Govind. They like to study different language news papers as Bengali, Marathi, English, Hindi and Urdu. Also they like to eat various fruits such as mango, grapes, apple, pine-apple and banana. All like to wear different colour shirts of red, blue, green, black and orange colour. Consider following statement and answer the question.

Q 4 - Whose favourite colour is blue?

According the given statements various favourite things of all persons can be tabulated as follows.

From the table it is clear that option (C) is the correct answer.

There are seven friends whose names are Ahmed, Gopal, Rajeev, Sreejesh, Namita, Jack and Elizabeth. They all live in Bangalore and all work in different leading multi-national companies. They work in IBM, TCS, HCL, Infosys, Accenture, Dell and HP not necessarily in the same order. They like different cars and the cars are Wagon R, Etios, Audi, Mercedes, Sumo, Travera and Celerio. Sreejesh works in TCS and likes Mercedes car. The one who works in Infosys likes Sumo car. And the one who works in Accenture likes Travera car. Namita does not like Travera or Sumo. Jack does not like Audi or Etios. Elizabeth likes Audi car. Ahmed likes to work in IBM. Gopal likes Wagon R car. Namita likes Celerio car. Rajeev does not like Travera car. Gopal does not work in Dell or HP. Namita does not work in Dell.

Q 5 - The one who likes Travera car works in which company?

Jack likes Travera car and he works in Accenture.

There are eight teachers in a primary school named Vivekananda Sikshakendra and their names are Amir, Puja, Jai, Ravi, Rabeya, Kali, Raja and Ranjan. Ranjan, Raja, Amir and Puja sit in row I facing south. Similarly Kali, Rabeya, Jai and Ravi sit in row II facing north. So all the students face each other in the arrangement. Ranjan sits at one of the ends. Amir is second to the left of Ranjan. Kali faces Amir. Rabeya is not at one end. Ranjan does not face Ravi. Rabeya does not face Raja.

Q 6 - Who is immediate right of Puja in this arrangement?

The arrangement is as follows

The persons in row I and row II face each other. So, immediate right of Puja in this arrangement is Ranjan.

Six friends are sitting in a row and all of them are facing north. Name of all the friends are Gyan, Mayank, Chinmayee, Suvarna, Piyush and Rohan not necessarily in the same order they are sitting. Mayank is at one of the extreme end. There are two persons sitting between Gyan and Rohan. Between Piyush and Chinmayee, there is only one person. Suvarna is second to the left of Gyan. Gyan is right of Chinmayee.

Q 7 - Who sits third to the right of Suvarna?

A - Who sits third to the right of Suvarna?

After analysing the given data, we can conclude that the sitting arrangement is like this −

Piyush sits third to the right of Suvarna.

Read the information given below and answer the questions that follow −

There are six friends in a college and all of them decided to pursue different types of sports after completion of college life. Their names are Aakash, Pabitra, Radha, Rudra, Avinav, and Ritiesh. They are interested to become cricketer, golfer, runner, footballer, hockey player and swimmer but not respectively in the same order. Aakash will like to be a cricketer, Ritiesh hockey player, Radha will neither become golfer nor runner, Rudra is neither footballer nor swimmer. Avinav will be a runner, and Pabitra will be a swimmer

From the given information try to answer the following question.

Q 8 - Who is cricketer among them?

If we look at the following table, we can answer the question −

Aakash is the cricketer among them.

Study the following information carefully to answer the given question.

C studies in class V. Hence, option A is correct.

A family consists of six members Payal, Sajan, Rohan, Sita, Tutu and Balram. There are two married couples. Sajan is an IAS and the father of Tutu. Balram is grandfather of Rohan and is a businessman. Sita is grandmother of Tutu and is a housewife. There is one IAS, one businessman, one air hostess, one housewife and two students in the family.

Based on the data provided, answer the following question. 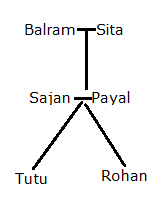 Sita is mother-in-law of Payal.