Position of a point in a plane

In coordinate geometry, points are placed on the "coordinate plane" as shown below. It has two scales - one running across the plane called the "x axis" and another right angle to it called the y axis. (These can be thought of as similar to the column and row in the paragraph above.) The point where the axes cross is called the origin and is where both x and y are zero. 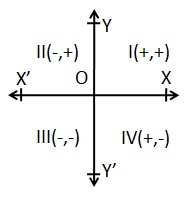 On the x-axis, values to the right are positive and those to the left are negative. On the y-axis, values above the origin are positive and those below are negative. A point's location on the plane is given by two numbers; the first tells where it is on the x-axis and the second which tells where it is on the y-axis. Together, they define a single, unique position on the plane. So in the diagram above, the point A has an x value of 20 and a y value of 15. These are the coordinates of the point A, sometimes referred to as its "rectangular coordinates". 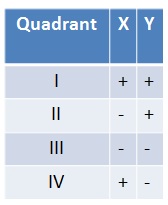 Note that the order is important; the x coordinate is always the first one of the pair.

Distance of a point from the origin

Area of a triangle

Division of a line segment by a point

If A(x1,y1) and B(x2,y2) be the end points of a line segment AB, then the co-ordinates of midpoint of AB are

Centroid of a triangle