Explain the concatenation process in DFA

If L1 and If L2 are two regular languages, their union L1 ∩ L2 will also be regular.

In this property, we say that concatenation of two DFAs is also DFA.

Design a DFA over an alphabet {a,b} where the string starts with ‘a’ and ends with ‘b’.

There are two different types of languages are formed for a given condition, which are as follows −

In L1, starting element is ‘a’ and

It starts with ‘a’

The state transition diagram for L1 is as follows − 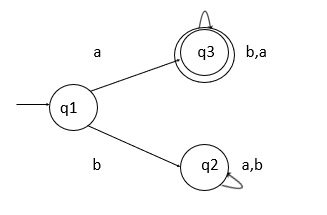 In the above state transition diagram, q1 is the initial state.

The state transition diagram for L2 is as follows −

Once we generate the strings {ab,abb,abab,……}, it satisfies the condition that every string in the language ends with ‘b’.

When we concatenate L1 and L2, we get the following result −