A Turing machine is a seven tuples

Let ‘M’ be a symbol used to separate two integers

Step 1 − Let’s take two unary integers as an input. We start from the initial state q0.

Step 2 − If we find the 1 in the string then go to the same state without changing the value of 1, and go to the right of the string.

Step 3 − If we find the m symbol then ignore this symbol without changing the symbol and go to the right of the string.

Step 4 − If we find the 1 after the pass the M symbol then change the value of 1 into the X and go to the left of the string.

Step 6 − So, this type after the symbol(M) we change all values of 1's into X and the same total number of 1's change into the X before the symbol M.

Step 7 − Apply these steps and get the Turing machine subtraction of two unary integers.

While working with subtraction, the Turing machine considers any of the three cases based on input given by the user.

If ‘a’ and ‘b’ are two integers, we have two consider whether −

By consider all the three conditions, the final Turing machine is as follows− 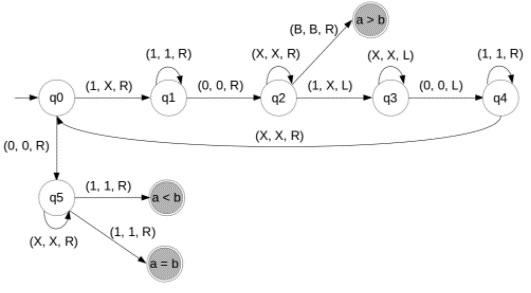 Explanation of the diagram