JavaFX provides a complete API with a rich set of classes and interfaces to build GUI applications with rich graphics. The important packages of this API are −

The following illustration shows the architecture of JavaFX API. Here you can see the components that support JavaFX API. 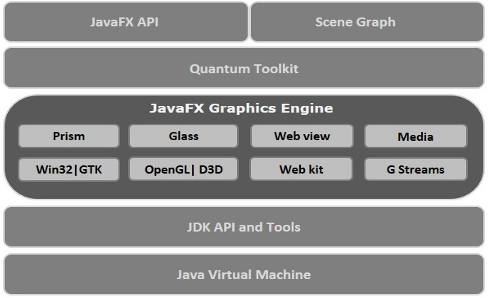 A node is a visual/graphical object and it may include −

In general, a collection of nodes makes a scene graph. All these nodes are arranged in a hierarchical order as shown below. 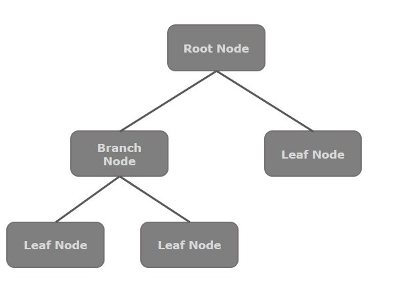 Each node in the scene graph has a single parent, and the node which does not contain any parents is known as the root node.

Prism is a high performance hardware–accelerated graphical pipeline that is used to render the graphics in JavaFX. It can render both 2-D and 3-D graphics.

To render graphics, a Prism uses −

In case the hardware support for graphics on the system is not sufficient, then Prism uses the software render path to process the graphics.

When used with a supported Graphic Card or GPU, it offers smoother graphics. Just in case the system does not support a graphic card, then Prism defaults to the software rendering stack (either of the above two).

It is an abstraction over the low-level components of Prism, Glass, Media Engine, and Web Engine. It ties Prism and GWT together and makes them available to JavaFX.

Using JavaFX, you can also embed HTML content in to a scene graph. WebView is the component of JavaFX which is used to process this content. It uses a technology called Web Kit, which is an internal open-source web browser engine. This component supports different web technologies like HTML5, CSS, JavaScript, DOM and SVG.

Using WebView, you can −

In general, using WebView, you can control web content from Java.

The JavaFX media engine is based on an open-source engine known as a Streamer. This media engine supports the playback of video and audio content.

The package javafx.scene.media contains the classes and interfaces to provide media functionality in JavaFX. It is provided in the form of three components, which are −