In general, a chart is a graphical representation of data. There are various kinds of charts to represent data such as Bar Chart, Pie Chart, Line Chart, Scatter Chart, etc. 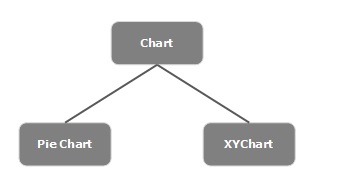 To create a chart, you need to −

To create a chart, instantiate its respective class. For example, if you want to create a line chart, you need to instantiate the class named Line as follows −

As observed in the above code, while instantiating, you need to pass two objects representing the X and Y axis of the chart respectively.

In general, the axis of the charts can be represented by −

In JavaFX, an axis is an abstract class representing X or Y axis. It has two subclasses to define each type of axis, namely CategoryAxis and NumberAxis as shown in the following diagram − 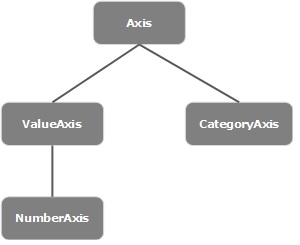 To this axis, you need set the list of categories and label to the axis as shown below −

All the XY charts are represented along the XY plane. To plot a set of points in a chart, we need to specify a series of XY coordinates.

The <X,Y> class of the javafx.scene.chart package is a class using which, you can send data to a chart. This class holds an observable list of named series. You can get this list using the getData() method of XYChart.Series class as shown below −

Where, series is the object of the XYChart.Series class. You can add data to this list using the add() method as follows −

These two lines can be written together as shown below −