SVG (Scalable Vector Graphics) is an XML based language to define vector based graphics.

In JavaFX we can construct images by parsing SVG paths. Such shapes are represented by the class named SVGPath. This class belongs to the package javafx.scene.shape.

By instantiating this class, you can create a node which is created by parsing an SVG path in JavaFX.

This class has a property named content of String datatype. This represents the SVG Path encoded string, from which the image should be drawn.

To draw a shape by parsing an SVG path, you need to pass values to this property, using the method named setContent() of this class as follows −

To Draw a shape by parsing an SVGPath in JavaFX, follow the steps given below.

Step 2: Creating an Object of the SVGPath Class

You can create a required shape in JavaFX by parsing an SVGPath. To do so, instantiate the class named SVGPath which belongs to a package javafx.scene.shape. You can instantiate this class as follows.

Set the content for the SVG object using the method setContent(). To this method, you need to pass the SVGPath. Using which, a shape should be drawn in the form of a string as shown in the following code block.

Pass the SVGPath (node) object created in the previous step as a parameter to the constructor of the Group class. This should be done in order to add it to the group as follows −

Create a Scene by instantiating the class named Scene which belongs to the package javafx.scene. To this class pass the Group object (root) created in the previous step.

You can set the title to the stage using the setTitle() method of the Stage class. The primaryStage is a Stage object which is passed to the start method of the scene class as a parameter.

Launch the JavaFX application by calling the static method launch() of the Application class from the main x method as follows.

Following is a program which generates a shape by parsing SVG path using JavaFX. Save this code in a file with the name SVGExample.java.

On executing, the above program generates a JavaFX window displaying a triangle, which is drawn by parsing the SVG path as shown below. 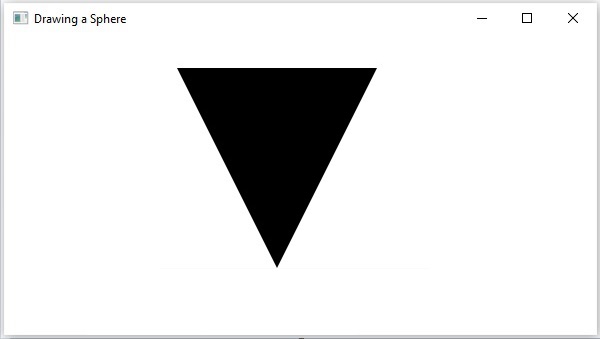