Every web page resides inside a browser window which can be considered as an object.

A Document object represents the HTML document that is displayed in that window. The Document object has various properties that refer to other objects which allow access to and modification of document content.

The way a document content is accessed and modified is called the Document Object Model, or DOM. The Objects are organized in a hierarchy. This hierarchical structure applies to the organization of objects in a Web document.

Here is a simple hierarchy of a few important objects − 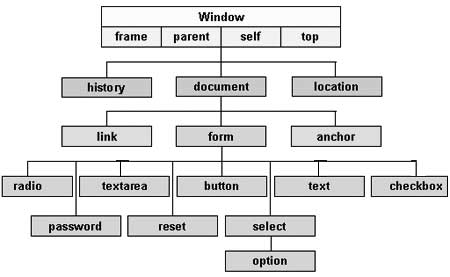 There are several DOMs in existence. The following sections explain each of these DOMs in detail and describe how you can use them to access and modify document content.

If you want to write a script with the flexibility to use either W3C DOM or IE 4 DOM depending on their availability, then you can use a capability-testing approach that first checks for the existence of a method or property to determine whether the browser has the capability you desire. For example −