A cuboid is a three dimensional or solid shape. Cuboids are made from 6 rectangles, which are placed at right angles. A cuboid that uses square faces is a cube, if the faces are rectangles, other than cubes, it looks like a shoe box.

A cuboid is a three-dimensional shape with a length (depth), width, and a height as shown in the following diagram − 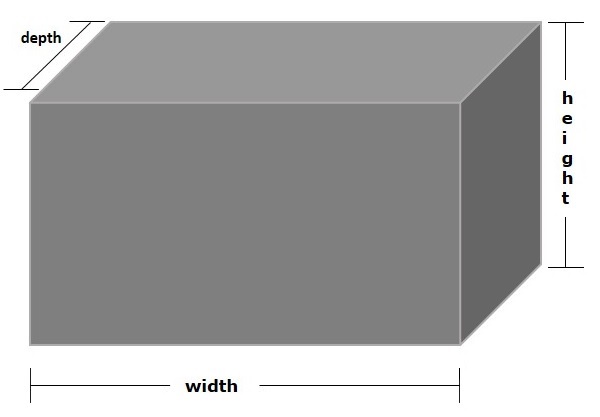 In JavaFX, a 3-dimensional box is represented by a class named Box. This class belongs to the package javafx.scene.shape.

By instantiating this class, you can create a Box node in JavaFX.

This class has 3 properties of the double datatype, which are −

To draw a cubic curve, you need to pass values to these properties by passing them to the constructor of this class. This has to be done in the same order at the time of instantiation as shown below −

To Draw a 3D box in JavaFX, follow the steps given below.

Create a Java class and inherit the Application class of the package javafx.application and implement the start() method of this class as follows −

You can create a Box in JavaFX by instantiating the class named BOX, which belongs to a package javafx.scene.shape. You can instantiate this class as follows.

Step 3: Setting Properties to the Box

Set the properties of the 3D box, Width, Height and Depth, using their respective setter methods as shown in the following code block.

Pass the Box (node) object, created in the previous step, as a parameter to the constructor of the Group class. This should be done in order to add it to the group as follows −

Create a Scene by instantiating the class named Scene, which belongs to the package javafx.scene. To this class, pass the Group object (root), created in the previous step.

In addition to the root object, you can also pass two double parameters representing height and width of the screen along with the object of the Group class as follows −

You can set the title to the stage using the setTitle() method of the Stage class. The primaryStage is a Stage object, which is passed to the start method of the scene class as a parameter.

You can add a Scene object to the stage using the method setScene() of the class named Stage. Add the Scene object prepared in the previous steps using the following method −

Following is a program which generates a 3D box using JavaFX. Save this code in a file with the name BoxExample.java.

On executing, the above program generates a JavaFX window displaying a 3D Box as shown below − 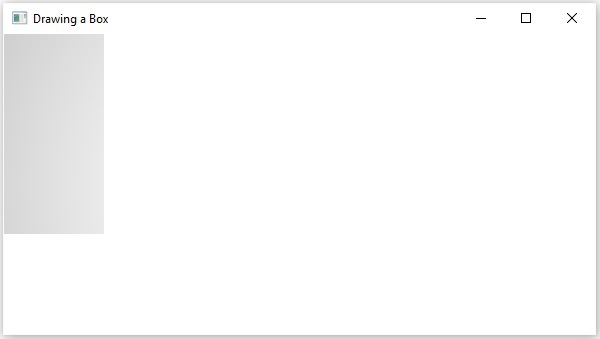