Adobe RoboHelp Server is a server based help solution. You can upload your help content on a server, which can then provide real-time end user feedback. It can log data on the queries, which is asked by the users. RoboHelp Server can graphically show how users are navigating around the help system. 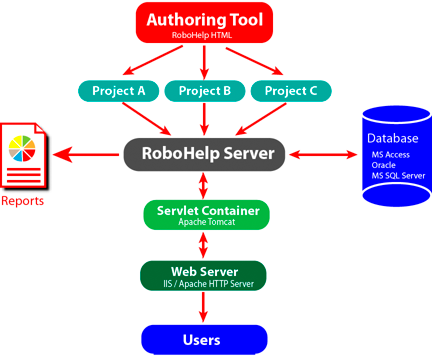 You can use an authoring tool to author the content, which can include multiple projects and upload the entire project onto the RoboHelp Server. The RoboHelp Server includes automatic project merging, which allows authors to work on different projects at different schedules and publish all of them to the same server. Authors can also publish projects written in various languages on the same server.

The RoboHelp Server can also interface with database servers such as Oracle or MS SQL Server and generate reports and logs. The response to the user query is relayed back via an Apache HTTP Server.