In JIRA, workflow is used to track the lifecycle of an Issue. Workflow is a record of statuses and transitions of an issue during its lifecycle. A status represents the stage of an issue at a particular point. An issue can be in only one status at a given point of time like Opened, To Do, Done, Closed, Assigned, etc.

As of now, an issue is created and opened. When the assignee starts working on the issue, the issue moves to the In Progress status. Here, the transition is starting the work, while the status of the issue is now progressive.

JIRA Workflow can be referred as a Defect Lifecycle. It follows the same concepts; the only difference is that it is generic for all issues rather than limited to Defects only. 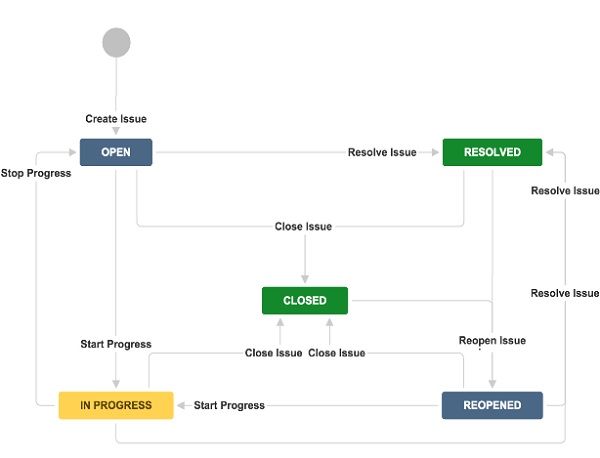 A transition is a one-way link, if an issue moves back and forth between two statuses; two transitions should be created.

Example − There are two-way transitions between closed and re-opened statuses. A closed issue can be reopened if any modifications are required at any time until the project completes, while a re-opened issue can be closed directly if additional work is taken care in another issue and no specific work has been done on the re-opened issue.