There are many types of capacitors depending upon their function, the dielectric material used, their shape etc. The main classification is done according to fixed and variable capacitors.

The classification is as shown in the following figure. 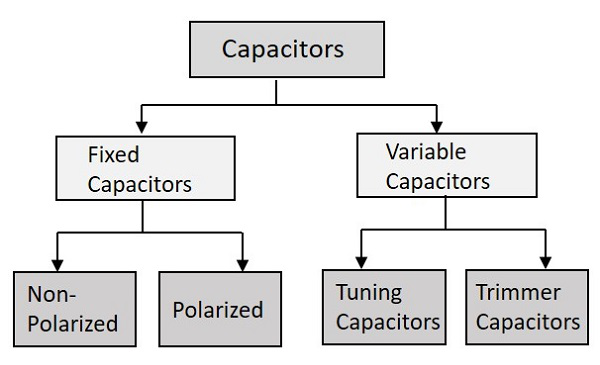 The main classification is just like the above one. The fixed capacitors are the ones whose value is fixed at the time of manufacturing itself and the variable ones provide us with an option to vary the value of capacitance.

Let us know something about the variable capacitors whose value alters when you vary, either electrically or mechanically. Variable capacitors in general consists of interwoven sets of metallic plates in which one is fixed and the other is variable. These capacitors provide the capacitance values so as to vary between 10 to 500pF.

The ganged capacitor shown here is a combination of two capacitors connected together. A single shaft is used to rotate the variable ends of these capacitors which are combined as one. The dotted line indicates that they are connected internally.

There are many uses of these variable resistors such as for tuning in LC circuits of radio receivers, for impedance matching in antennas etc. The main types of variable capacitors are Tuning capacitors and Trimmer capacitors.

Tuning capacitors are popular type of variable capacitors. They contain a stator, a rotor, a frame to support the stator and a mica capacitor. The constructional details of a tuning capacitor are shown in the following figure. 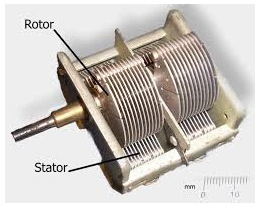 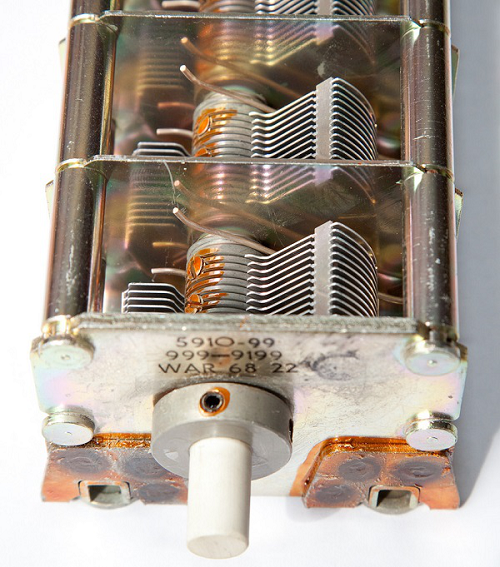 There are three leads of a trimmer capacitor, one connected to stationary plate, one to rotary and the other one is common. The movable disc is a semi-circular shaped one. A trimmer capacitor would look like the ones in the following figure. 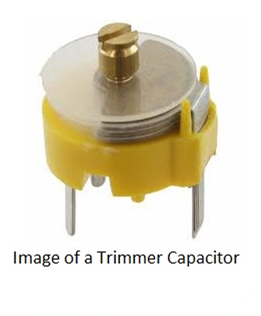 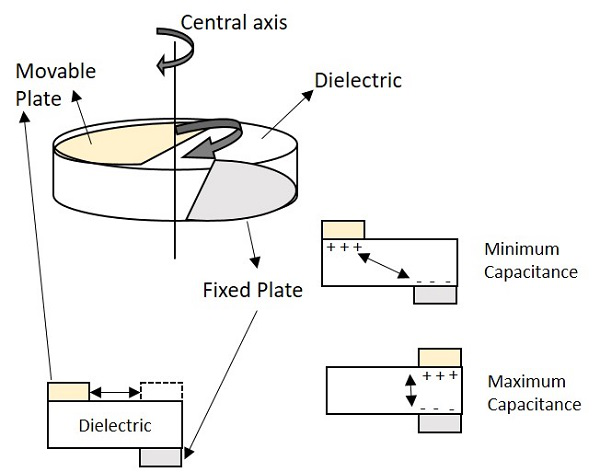 One of the two plates is movable, while the other is fixed. The dielectric material is fixed. When the movable plate is moved, opposite to the area between movable and fixed electrode, then the capacitance can be changed. The capacitance will be higher if the opposite area gets bigger, as both the electrodes act as two plates of a capacitor.

The Trimmer Capacitors are easily fixed on a PCB (Printed Circuit Board) and they are mostly used for calibration of equipment.