A non-conducting region is present between these two plates which is called as dielectric. This dielectric can be vacuum, air, mica, paper, ceramic, aluminum etc. The name of the capacitor is given by the dielectric used.

The standard units for capacitance is Farads. Generally, the values of capacitors available will be in the order of micro-farads, pico-farads and nano-farads. The symbol of a capacitor is as shown below. 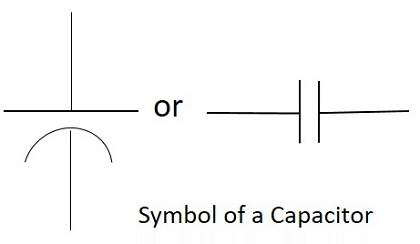 The Capacitance of a capacitor is proportional to the distance between the plates and is inversely proportional to the area of the plates. Also, the higher the permittivity of a material, the higher will be the capacitance. The permittivity of a medium describes how much electric flux is being generated per unit charge in that medium. The following image shows some practical capacitors. 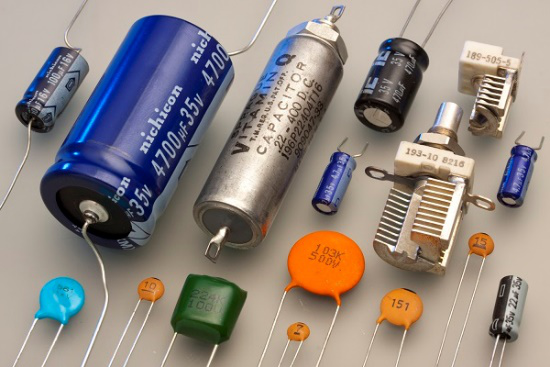 When two plates having same area A, and equal width are placed parallel to each other with a separation of distance d, and if some energy is applied to the plates, then the capacitance of that parallel plate capacitor can be termed as −

C = Capacitance of a capacitor

d = distance between the plates

A = area of the two conducting plates 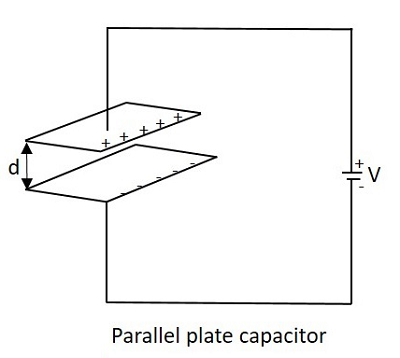 Working of a Capacitor

Initially, the negative and positive charges on two plates of the capacitor are in equilibrium. There is no tendency for a capacitor to get charged or discharged. The negative charge is formed by the accumulation of electrons, while the positive charge is formed by the depletion of electrons. As this happens without any external charge given, this state is electrostatic condition. The figure below shows the capacitor with static charges.

The accumulation and depletion of electrons according to the varying positive and negative cycles of the AC supply, can be understood as “current flow”. This is called as Displacement Current. The direction of this current flow keeps on changing as this is AC.

Charging of a Capacitor 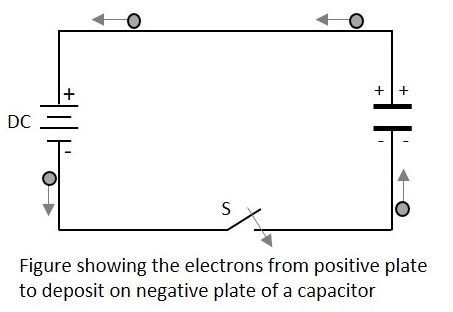 During this process of charging, the electrons move through the DC supply but not through the dielectric which is an insulator. This displacement is large, when the capacitor starts to charge but reduces as it charges. The capacitor stops charging when the voltage across capacitor equals the supply voltage. 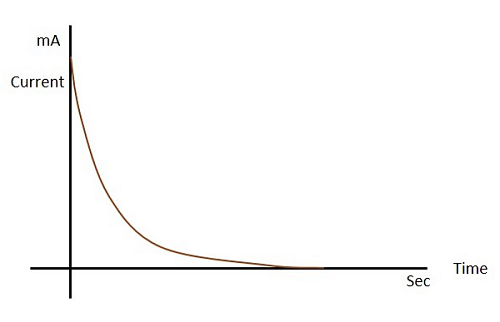 Let us see what happens to the dielectric when the capacitor begins to charge. 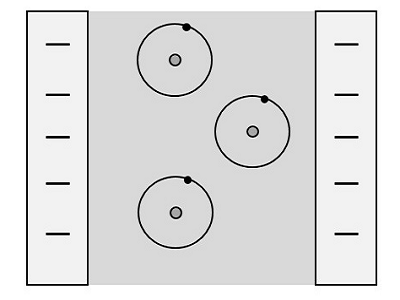 When charge deposition takes place, the electrons tend to move towards the positive charged plate, but still they keep on revolving as shown in the figure. 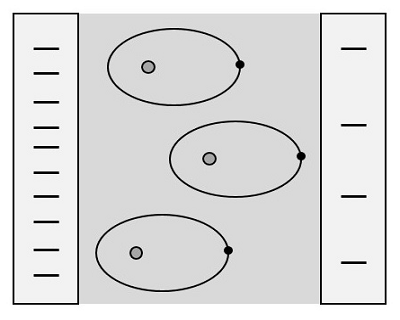 If the charge increases further, the orbits expand more. But if it still increases, the dielectric breaks down shorting the capacitor. Now, the capacitor being fully charged, it’s ready to get discharged. It is enough if we provide a path for them to travel from negative to positive plate. The electrons flow without any external supply as there are too many number of electrons on one side and barely any electrons on the other. This imbalance is adjusted by the discharge of the capacitor.

Also, when a discharge path is found, the atoms in the dielectric material tend to get to their normal circular orbit and hence forces the electrons to get discharged. This kind of discharge enables capacitors to deliver high currents in a short period of time, just as in a camera flash.

To know the value of a capacitor, it is usually labelled as below −

Though these number markings are being used now-a-days, an International color coding scheme was developed long ago, to understand the values of capacitors. The color coding indications are just as given below.

These indications were used to identify the value of capacitors. 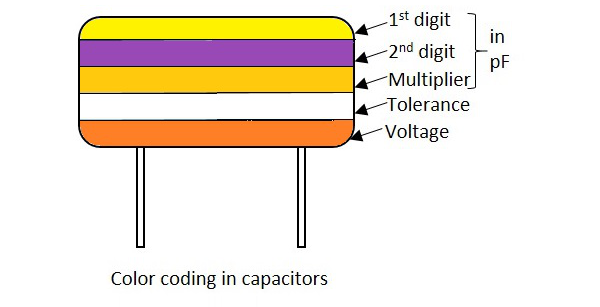 In these five band capacitors, the first two bands represent digits, third one indicates multiplier, fourth for tolerance and the fifth represents voltage. Let us look at an example to understand the color coding process.

Example 1 − Determine the value of a capacitor with a color code yellow, violet, orange, white and red.

Solution − The value of yellow is 4, violet is 7, orange is 3 which represents multiplier. White is ±10 which is the tolerance value. Red represents the voltage. But to know the voltage rating, we have got another table, from which the particular band to which this capacitor belongs, has to be known.

The following table shows how voltage is determined depending upon the bands the capacitors belong to.

This is an important term. Capacitive Reactance is the opposition offered by a capacitor to the alternating current flow, or simply AC current. A capacitor resists the change in the flow of current and hence it shows some opposition which can be termed as reactance, as the frequency of the input current should also be considered along with the resistance it offers.

In a purely capacitive circuit, the current IC leads the applied voltage by 90°

All the capacitors are usually manufactured considering a reference temperature of 25°C. Hence the temperature coefficient of capacitors is considered for the values of temperatures that are above and below this value.