Inductors are available in different shapes and has different uses. Their sizes vary depending upon the material used to manufacture them. The main classification is done as fixed and variable inductors. An inductor of few Henries may be in a dumbbell shape at the size of a simple resistor. A fixed inductor always has silver as its first color in color coding.

The Core of the Inductor is its heart. There are many types of Inductors according to the core material used. Let us have a look at a few of them.

The commonly seen inductor, with a simple winding is this air-Core Inductor. This has nothing but air as the core material. The non-magnetic materials like plastic and ceramic are also used as core materials and they also come under this air-core Inductors. The following image shows various air-core inductors.

These Inductors offer a minimum signal loss at the applications having a very high magnetic field strength. Also, there exists no core losses as there is no solid core material.

These Inductors have Ferromagnetic materials, such as ferrite or iron, as the core material. The usage of such core materials helps in the increase of inductance, due to their high magnetic permeability. Permeability measures the ability of supporting the formation of magnetic fields within the materials. The following image shows how an Iron-core Inductor looks like − 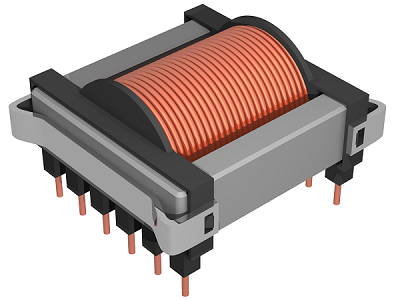 The inductors that have ferromagnetic core materials just like these, suffer from core losses and energy losses at high frequencies. These Inductors are used in the manufacture of few types of transformers.

These Inductors have a magnetic material as the core substance to which the wire is wound. These are in circular ring shape, just as shown in the following figure. 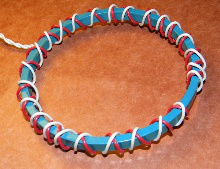 The main advantage of this type of inductors is that, due to the circular shape, symmetry is achieved in the whole shape of the inductor, due to which there are minimum losses in the magnetic flux. These inductors are mostly used in AC circuit applications.

These are the inductors that have laminated thin steel sheets, such as stacks, as the core materials. Usually for an inductor, if the loop area is increased for the current to travel, the energy losses will be more. Whereas, in these laminated core Inductors, thin steel sheets of stacks are helpful in blocking the eddy currents, which minimize the loop action.

The following figure shows an image of a laminated core inductor. 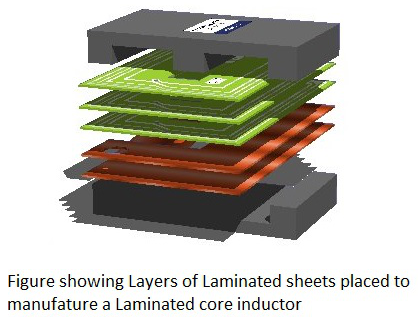 The main advantage of these inductors is minimizing the energy loss with its construction. These laminated core inductors are mostly used in the manufacture of transformers.

As the name implies, the core of these inductors have magnetic materials with some air gaps in it. But this kind of construction provides an advantage to the core, to store high level of energy compared with the other types. The following figure shows an image of a Powdered Iron core Inductor. 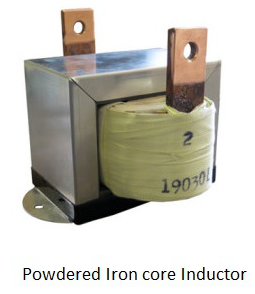 These inductors provide very low eddy current losses and hysteresis losses. These are available at lowest prices and have very good inductance stability.