The rate of change of current produces change in the magnetic field, which induces an EMF in opposite direction to the voltage source. This property of induction of EMF is called as the Inductance.

The formula for inductance is

A coil is said to have an inductance of one Henry when an EMF of one volt is self-induced in the coil where the current flowing changed at a rate of one ampere per second.

The current is in the figure indicate the source current while iind indicates the induced current. The flux represents the magnetic flux created around the coil. With the application of voltage, the current is flows and flux gets created. When the current is varies, the flux gets varied producing iind.

We can write the above equation as

The actual equation is written as

The minus in the above equation indicates that the EMF is induced in opposite direction to the voltage source according to Lenz’s law.

As the current carrying coil produces some magnetic field around it, if another coil is brought near this coil, such that it is in the magnetic flux region of the primary, then the varying magnetic flux induces an EMF in the second coil. If this first coil is called as Primary coil, the second one can be called as a Secondary coil.

When the EMF is induced in the secondary coil due to the varying magnetic field of the primary coil, then such phenomenon is called as the Mutual Inductance. 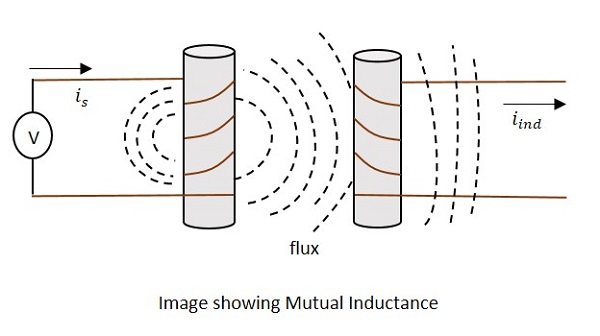 The current is in the figure indicate the source current while iind indicates the induced current. The flux represents the magnetic flux created around the coil. This spreads to the secondary coil also.

With the application of voltage, the current is flows and flux gets created. When the current is varies, the flux gets varied producing iind in the secondary coil, due to the Mutual inductance property.

Mutual inductance M of the two circuits describes the amount of the voltage in the secondary induced by the changes in the current of the primary.

Where $\frac{\Delta I}{\Delta t}$ the rate of change of current with time and M is the co-efficient of Mutual inductance. The minus sign indicates the direction of current being opposite to the source.

The units of Mutual inductance is

(From the above equation)

Depending upon the number of turns of the primary and the secondary coils, the magnetic flux linkage and the amount of induced EMF varies. The number of turns in primary is denoted by N1 and secondary by N2. The co-efficient of coupling is the term that specifies the mutual inductance of the two coils.

There are a few factors that affect the performance of an inductor. The major ones are discussed below.

Length of the coil

Cross sectional area of the coil

Permeability of the core

This is an important factor to be known for calculating Mutual inductance of two coils. Let us consider two nearby coils of N1 and N2 turns respectively.

The current through first coil i1 produces some flux Ψ1. The amount of magnetic flux linkages is understood by weber-turns.

Let the amount of magnetic flux linkage to the second coil, due to unit current of i1 be

This can be understood as the Co-efficient of Mutual inductance, which means

Hence the Co-efficient of Mutual inductance between two coils or circuits is understood as the weber-turns in one coil due to 1A of current in the other coil.

If the self-inductance of first coil is L1, then

Similarly, coefficient of mutual inductance due to current i2 in the second coil is

If self-inductance of second coil is L2

Multiplying 1 and 2, we get

The above equation holds true when the whole changing flux of primary coil links with the secondary coil, which is an ideal case. But in practice, it is not the case. Hence, we can write as

Where K is known as the coefficient of coupling.

There are many applications of Inductors, such as −