These valance electrons, containing a series of energy levels, form an energy band which is called as Valence Band. The valence band is the band having the highest occupied energy.

The gap between valence band and conduction band is called as forbidden energy gap. As the name implies, this band is the forbidden one without energy. Hence no electron stays in this band. The valence electrons, while going to the conduction band, pass through this.

The following figure shows the valance band, conduction band, and the forbidden gap. 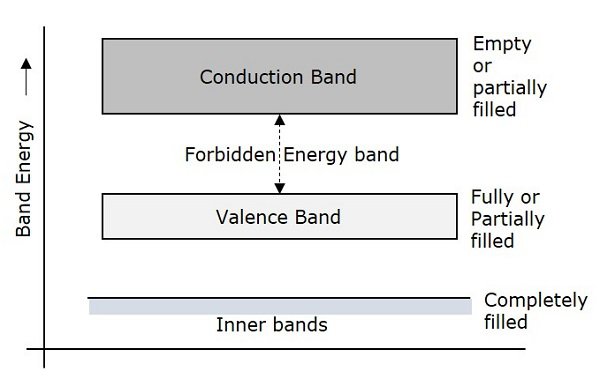 Depending upon the size of the forbidden gap, the Insulators, the Semiconductors and the Conductors are formed.

Insulators are such materials in which the conduction cannot take place, due to the large forbidden gap. Examples: Wood, Rubber. The structure of energy bands in Insulators is as shown in the following figure. 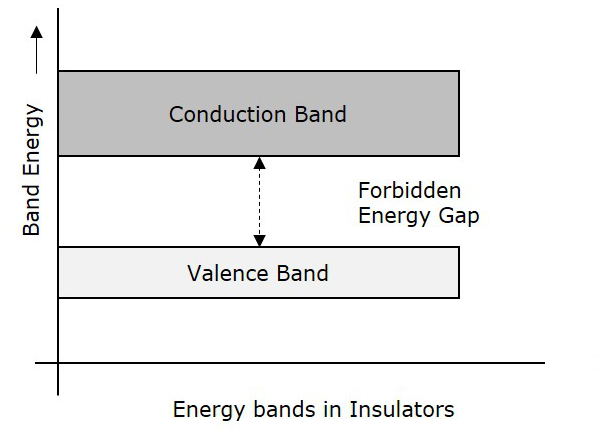 The following are the characteristics of Insulators.

Semiconductors are such materials in which the forbidden energy gap is small and the conduction takes place if some external energy is applied. Examples: Silicon, Germanium. The following figure shows the structure of energy bands in semiconductors.

The following are the characteristics of Semiconductors.

Conductors are such materials in which the forbidden energy gap disappears as the valence band and conduction band become very close that they overlap. Examples: Copper, Aluminum. The following figure shows the structure of energy bands in conductors. 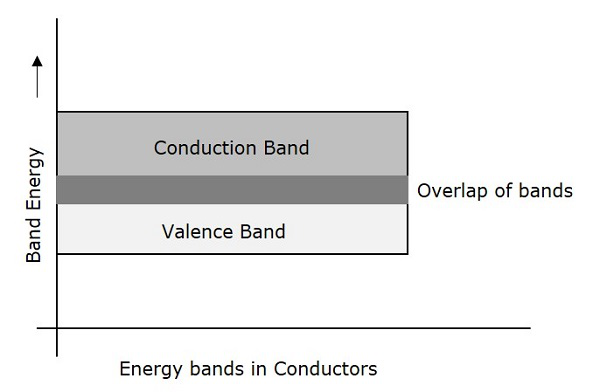 The following are the characteristics of Conductors.

There is a necessity to discuss a few important terms here before we move on to subsequent chapters.

It is simply the flow of electrons. A continuous flow of electrons or charged particles, can be termed as Current. It is indicated by I or i. It is measured in Amperes. This can be alternating current AC or direct current DC.

It is the potential difference. When there occurs a difference in potentialities, between two points, there is said to be a voltage difference, measured between those two points. It is indicated by V. It is measured in Volts.

It is the property of opposing the flow of electrons. The possession of this property can be termed as resistivity. This will be discussed later in detail.

With the terms discussed above, we have a standard law, which is very crucial for the behavior of all the electronic components, called as Ohm’s Law. This states the relation between current and voltage in an ideal conductor.

According to Ohm’s law, the potential difference across an ideal conductor is proportional to the current through it.

Hence the voltage is directly proportional to the resistance it offers.

But the current is inversely proportional to the resistance.

Hence, in practice, an Ohm’s law can be stated as −

This law is helpful in determining the values of unknown parameters among the three which help to analyze a circuit.