These are the capacitors that have no specific polarities, which means that they can be connected in a circuit, either way without bothering about the placement of right lead and left lead. These capacitors are also called as Non-Electrolytic Capacitors.

The main classification of Non-Polarized capacitors is done as shown in the following figure.

Among the types of capacitors, let us first go through the Ceramic Capacitors.

The common capacitors used among fixed type are Ceramic Capacitors. The Ceramic capacitors are fixed capacitors that have ceramic material as a dielectric.

These ceramic capacitors are further classified as class1 and class2 depending upon their applications. For instance, Class1 has high stability and works best for resonant circuit applications, while class2 has high efficiency and gives its best for coupling applications.

A hollow tubular or plate like ceramic material such as titanium dioxide and barium titanate is coated with a deposition of silver compound on both walls, so that both sides act as two capacitor plates and ceramic acts as a dielectric. Leads are drawn from these two surfaces and this whole assembly is encapsulated in a moisture-proof coating.

The most often used modern ceramic capacitors are Multi-Layer Chip Capacitors (MLCC). These capacitors are made in surface mounted technology and are mostly used due to their small size. These are available in the order of 1ηF to 100µF.

The Film Capacitors are the ones which have a film substance as a dielectric material. Depending upon the type of film used, these are classified as Paper and Metal film capacitors.

Paper capacitors use Paper as a dielectric material. Two thin tin foil sheets are taken and placed between thin waxed or oiled paper sheets. This paper acts as a dielectric. Now-a-days paper is being replaced by plastic.

These sheets are sandwiched and are rolled into a cylindrical shape and encapsulated in a plastic enclosure. Leads are drawn out. The following figure shows an example of Paper Capacitors. 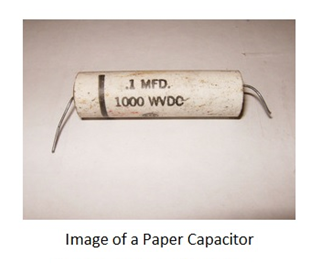 Paper capacitors are available in the order of 0.001µF to 2µF and the voltage rating can be as high as 2000volts. These capacitors are useful in high voltage and current applications.

Metal Film capacitors are another type of film capacitors. These are also called as Metal Foil Capacitors or Metallized Paper Capacitors as the dielectric used here is a paper coated with metallic film.

Unlike in paper capacitors, a film of Aluminum or Zinc is coated on a paper to form a dielectric in this metallic film capacitors. Instead of Aluminum sheets placing between papers, the paper itself is directly coated here. This reduces the size of the capacitor. 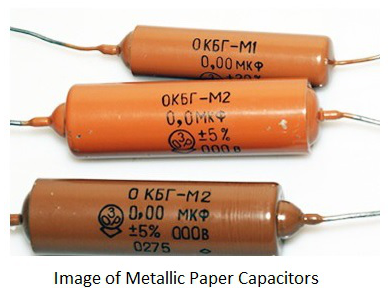 The Aluminum coating is preferred over zinc coating so as to avoid destruction of capacitor due to chemical reduction. The Aluminum coated sheets are rolled in the form of a cylinder and leads are taken. This whole thing is encapsulated with wax or plastic resin to protect the capacitor. These capacitors are useful in high voltage and current applications.

These are the miscellaneous capacitors that are named after the dielectric materials used. This group includes Mica Capacitors, Air Capacitors, Vacuum Capacitors and Glass Capacitors etc.

The Mica Capacitors are made by using thin Mica sheets as dielectric materials. Just like paper capacitors, thin metal sheets are sandwiched with mica sheets in between. Finally the layers of metal sheets are connected at both ends and two leads are formed. Then the whole assembly is enclosed in plastic Bakelite capsule. The following image shows how a Mica capacitor looks like. 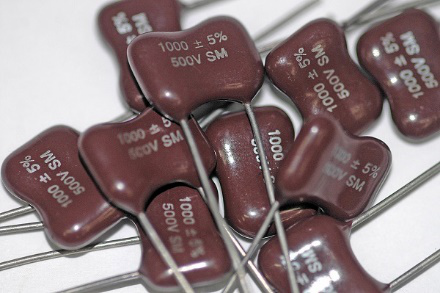 Mica Capacitors are available in the range of 50pF to 500pF. The Mica capacitors have high working voltage up to 500volts. These are most commonly used capacitors for electronic circuits such as ripple filters, Resonant circuits, Coupling circuits and high power, high current RF broadcast transmitters.

The Vacuum Capacitors uses high vacuum as dielectric instead of air or some other material. These are also available in fixed and variable modes. The construction of these capacitors is similar to vacuum tubes. They are mostly seen in the form of a glass cylinder which contain inter-meshed concentric cylinders. 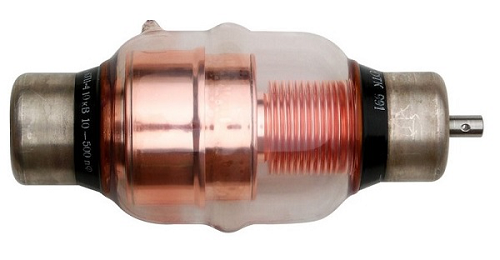 The following image shows how a fixed vacuum capacitor looks like −

Variable vacuum capacitors are available at a range of 12pF to 5000pF and they are used for high voltage applications such as 5kV to 60kV. They are used in main equipment such as high power broadcast transmitters, RF amplifiers and large antenna tuners.

Glass capacitors are very exclusive ones with many advantages and applications. As all of the above types, here glass is the dielectric substance. Along with glass dielectric, Aluminum electrodes are also present in these capacitors. Plastic encapsulation is done after taking out the leads. The leads can be axial leads or tubular leads.

There are many advantages of a glass capacitor such as −

There are many applications for these glass capacitors such as −