These resistors are better understood with the help of the classification we have. Variable resistors are further divided into Potentiometers, Rheostats and Trimmers. 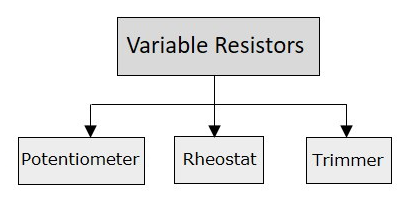 A Potentiometer is simply called as a Pot. This is a three-terminal resistor having a shaft which slides or rotates. This shaft when operated forms an adjustable voltage divider. The following figure shows an image of a Potentiometer. 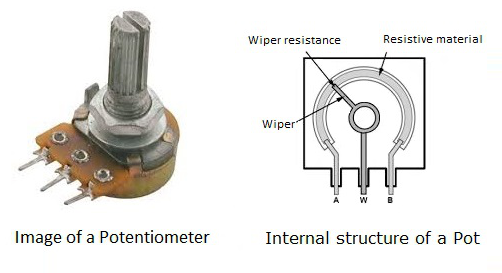 A potentiometer also measures the potential difference (voltage) in a circuit. A path of resistive material with resistance of low to high value is laid internally and a wiper is placed so that it connects the resistive material to the circuit. This is mostly used as a volume controller in TV sets and Music systems.

The Rheostat is used to control current. These are mostly used in the speed control of heavy motors. The resistance obtained by these is in the order of kilo ohms. Rheostats are mostly available as single tube and double tube rheostats, as shown in the following figure.

As a variable resistance they are often used for tuning and calibration in circuits. Now-a-days, the usage of rheostats was replaced by switching electronic devices, as rheostats have lower efficiency.