There are many types of diodes depending upon many factors such as the frequency used, their working and construction, their applications etc. Let us go through few of them.

These diodes are the normal PN junction diodes, which allow current to flow through them in only one direction and stop in the other direction. These diodes are used in rectifier circuits to convert alternating current into direct current. 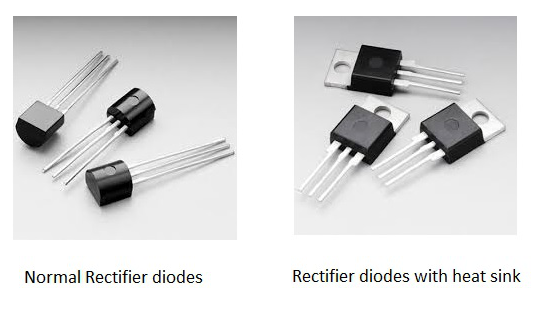 In the above figure, we can see the same rectifier diodes with a metal projection. This is added to the diode to minimize the heat distribution which might affect the diode sometimes. Such a metal projection is called as Heat sink. These help in the improvement of the diode performance and the diodes will be able to withstand high powers, without getting affected.

This is a special kind of diode which permits current flow not only in forward direction, but also in reverse direction. A normal diode, when operated in reverse bias, gets damaged if the reverse current above a certain value is passed through it. This “certain value” is called as the Breakdown voltage.

Avalanche diode is another diode which has the similar characteristics of Zener diode. The avalanche breakdown takes place across the entire PN junction, when the voltage drop is constant and is independent of current. This avalanche diode is used for photodetection.

V-I Characteristics of a Zener diode

The V-I Characteristics of a Zener diode are common for any diode when operated in forward bias. But the reverse bias operation of a Zener diode makes it very important to consider. Let us have a look at the graph. 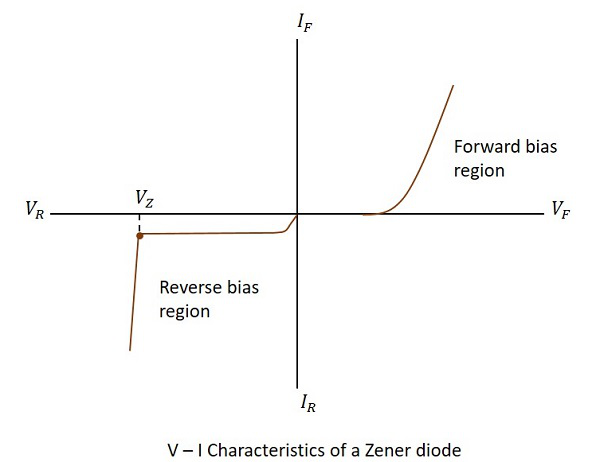 The point where the bent is shown in the reverse bias operation, is the Zener breakdown voltage, after which the diode allows high reverse currents through it. This Zener voltage is indicated by VZ. This incredible quality of Zener diode made it the most reliable one and have got many applications too.

This diode has many applications such as −

This is a normal single PN junction diode which is especially designed for switching purposes. This diode can exhibit two states of high and low resistance clearly which can be used alternatively. 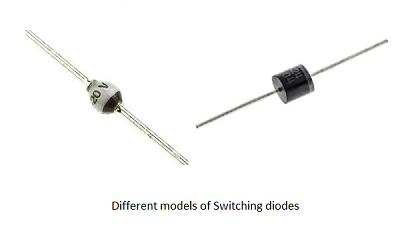 The junction capacitance of this diode is made very low so as to minimize other effects. The switching speed is made quite high. When the diode has high resistance it works as an open switch and it acts as a closed switch during low resistance. This transition occurs at a faster rate in switching diode, than in any ordinary one.

These have many applications such as −