Reports and Metrics group the results of execution at one place that helps to track the progress of the project.

To access the Report and Metrics section, select Test Execution → Test Reports and Metrics from the dashboard as shown below. 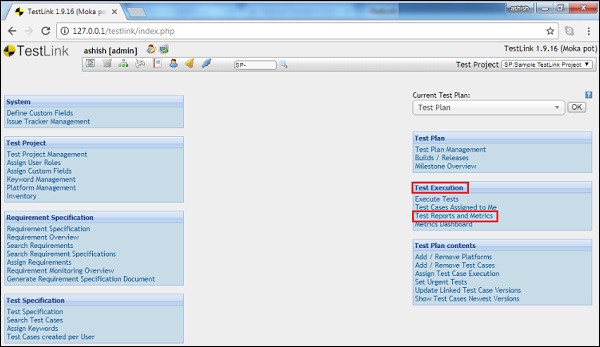 The left pane is used to navigate to each report and operate controls of reports behavior and display. The button “Print” initializes the printing of the right pane (no navigation will be printed).

You can print as HTML or Pseudo MS Word. You can also email the report in HTML format. The right pane displays a summary of each report. 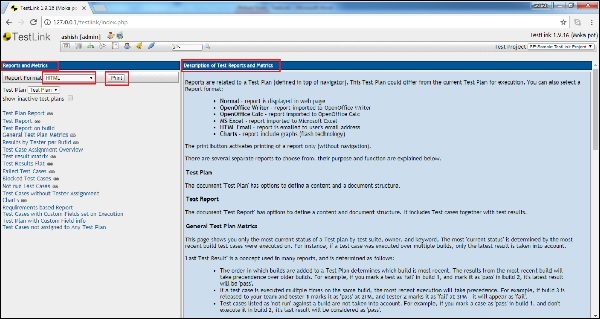 These metrics display the current status of a Test Plan by the following criteria - test suite, owner, milestone, priority and keyword.

In addition to this, it also displays the basic metrics for all enabled builds. The current status is determined by the recent Build where Test Cases are executed.

For instance, if a Test Case is executed in multiple builds, only the latest result is counted. Last Test Result is a concept used in many reports, and is determined as follows −

When you click General Test Plan Metrics on the left side of the screen, it displays all the results as shown below. 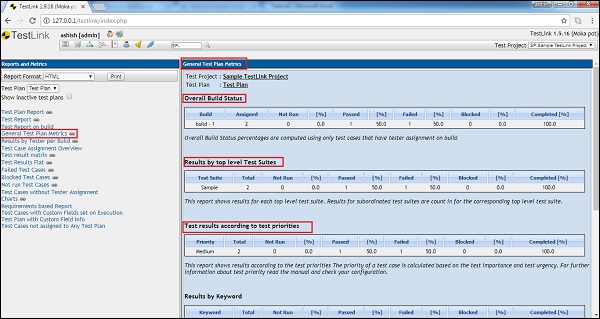 Results by Top Level Test Suites − It lists the results of each top level suite. It displays the number of test cases with status as Passed, Failed, Blocked, Not run, and Completed (%). Results for top level suites include all children suites.

Results by Build − It lists the execution results for every Build. For each Build, it displays the total Test Cases, total pass, % passed, total failed, % failed, blocked, % blocked, not run, and % not run. If a Test Case has been executed twice on the same Build, the most recent execution will be taken into account.

Results by Keyword − It lists all the keywords assigned to cases in the current Test Plan, and the results associated with them. For each keyword, it displays the total Test Cases, total pass, % passed, total failed, % failed, blocked, % blocked, not run and % not run.