Find/Change is one of those functions that is simple but extremely powerful. As the name suggests, the Find/Change function lets you find your query and change to something else. You can find and change literally anything – even obscure stuff such as finding multiple spaces and converting them to a single space or even changing frames from one type to the other. 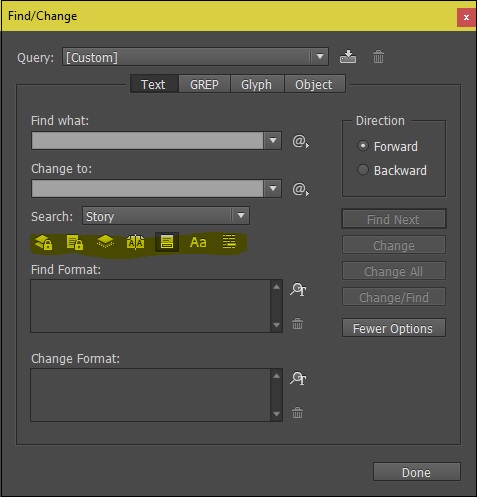 The most important part of this dialog box is defining the search criteria, which is highlighted in yellow. You can confine your search using these options to locked layers, hidden objects, footnotes, or even master pages. You can also limit your search to case sensitive words or search only for specific words.

The most important of all is using GREP. GREP in itself, requires a separate tutorial but in short, GREP is a standard for finding patterns in text and is derived from a UNIX command line utility called grep which stands for globally search a regular expression and print.

InDesign makes it easy to use GREP to find expression patterns in text such as special characters or spaces or simply to apply character styles.

In this example, we want to find all dashes within the text and convert them into endashes. An en-dash is slightly longer than a hyphen but shorter than an em-dash. 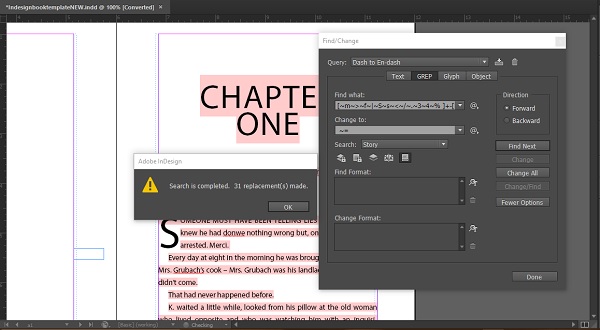 It is not possible to type an en-dash using a regular computer keyboard as it is a special character. Most word processors convert a double hyphen into an em-dash but not an endash.

To do this, go to the Query drop-down menu near the top of the Find/Change dialog box and from the drop-down menu, select the Dash to En-dash option. You will see that InDesign automatically populates the Find what and Change to fields with the GREP code.

Now just press the Change All button. In this case, InDesign has scanned the entire document and made 31 replacements, i.e. it has converted all 31 instances where the dash occurs, into an en-dash.

This can be very useful when working with large bodies of text where it is practically impossible to scan each and every line of text to make changes.