SAP Applications based on NW

SAP NetWeaver is known as open technology software component that provides you a platform to run critical business applications and integration between people, processes, and information. It allows the composition, provisioning, and management of SAP and non-SAP applications across a heterogeneous software environment.

The data in SAP BW is managed with the help of a centralized tool known as SAP BI Administration Workbench. The BI platform provides infrastructure, which include OLAP Processor, Metadata Repository, Process designer, and other functions.

The Business Explorer (BEx) is a reporting and analysis tool that supports query, analysis and reporting functions in BI. Using BEx, you can analyze the historical and current data to different degree of analysis.

SAP BW is known as an open and standard tool, which allows you to extract the data from different systems and then sends it to the BI system. It also evaluates the data with different reporting tools and you can distribute this to other systems.

The following diagram shows an open, broad and standard-based Architecture of Business Intelligence. 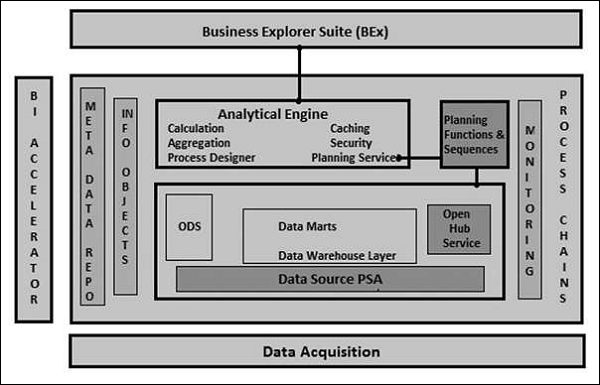 SAP PI/XI enables you to set up cross-system communication and integration, and allows you to connect SAP and non-SAP systems based on different programming languages like Java and SAP ABAP. It provides an open source environment that is necessary in complex system landscape for the integration of systems and for communication.

SAP Process Integration is a middleware to allow seamless integration between SAP and non-SAP application in a company or with systems outside the company.

SAP PI architecture consists of multiple components which are used at design time, configuration time, and runtime. In SAP PI, the sender system is known as the source and the receiver is called the target system and the architecture is known as Hub and Spoke structure. The Spoke is used to connect with external systems and the Hub is used to exchange messages.

A SAP PI system is divided into the following components − 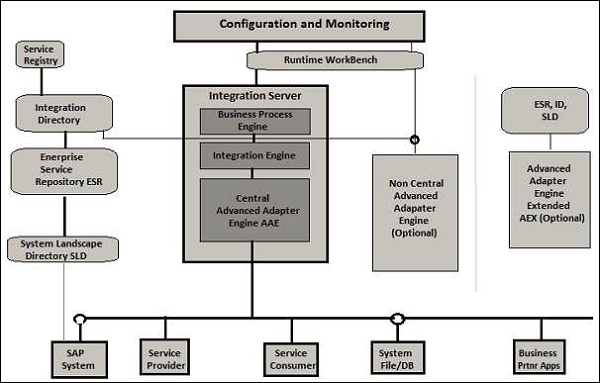 SAP NetWeaver mobile is a solution which is used to develop mobile solution for SAP Business Suite. You can use different tools to deploy and operate mobile applications for occasionally and always connected mobile devices.

There are two possible scenarios for SAP NetWeaver mobile −

In this scenario, use can work offline and doesn’t wait for network connectivity to middleware to work on any critical tasks assigned to them. NetWeaver mobile device also contains tool for data synchronization and data replication to make data available to the back-end system.

Applications are developed and deployed on the central server and it is rendered differently as per different mobile devices.

In both the mobile scenarios, SAP NetWeaver Mobile acts as the middleware for enterprise mobility. Following functions are provided using this middleware −

To access Web Dynpro runtime environment and graphical tools in ABAP workbench, you can use Transaction code - SE80.

Both these solutions are developed on NetWeaver platform and provides application and web-developed environment to users. 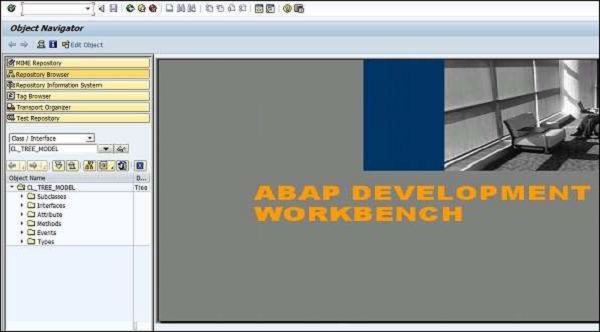 Web Dynpro is an ABAP environment for web development and is based on the Model View Controller (MVC) concept of UI programming. It is available for both Java and ABAP as per the platform, and supports similar functions.

Web Dynpro has the following features −

Following are the key concepts as part of Web Dynpro architecture −

Web Dynpro provides you with an environment for the development of web-based applications and you can use graphical tools to define Web Dynpro application in the form of metadata in application development. You can also define your own events; however, event handling should be defined in a separate code and that has to be executed when an event is triggered.

There are a wide range of graphical Web Dynpro tools that you can use to generate webbased applications. You don’t need to create source code for this. Following are the key features of graphical tools in Web Dynpro application −

For all these properties, you can use graphical tools without creating a source code.

You can connect Web Dynpro application to the back-end system using an adaptive RFC service or by calling a web service.

Web Dynpro applications are based on MVC model −