There are four types of Data Warehousing system.

A Data Mart is known as the simplest form of a Data Warehouse system and normally consists of a single functional area in an organization like sales, finance or marketing, etc.

Data Mart in an organization and is created and managed by a single department. As it belongs to a single department, the department usually gets data from only a few or one type of sources/applications. This source could be an internal operational system, a data warehouse or an external system.

In an OLAP system, there are less number of transactions as compared to a transactional system. The queries executed are complex in nature and involves data aggregations.

What is an Aggregation?

We save tables with aggregated data like yearly (1 row), quarterly (4 rows), monthly (12 rows) or so, if someone has to do a year to year comparison, only one row will be processed. However, in an un-aggregated table it will compare all rows.

Effective Measures in an OLAP system

Response time is known as one of the most effective and key measure in an OLAP system. Aggregated stored data is maintained in multi-dimensional schemas like star schemas (When data is arranged into hierarchical groups, often called dimensions and into facts and aggregate facts, it is called Schemas).

The latency of an OLAP system is of a few hours as compared to the data marts where latency is expected closer to a day.

In an OLTP system, there are a large number of short online transactions such as INSERT, UPDATE, and DELETE.

In an OLTP system, an effective measure is the processing time of short transactions and is very less. It controls data integrity in multi-access environments. For an OLTP system, the number of transactions per second measures the effectiveness. An OLTP data warehouse system contains current and detailed data and is maintained in the schemas in the entity model (3NF).

Day-to-Day transaction system in a retail store, where the customer records are inserted, updated and deleted on a daily basis. It provides very fast query processing. OLTP databases contain detailed and current data. Schema used to store OLTP database is the Entity model.

Differences between OLTP and OLAP

The following illustrations shows the key differences between an OLTP and OLAP system. 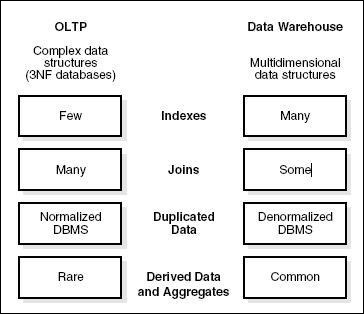 Predictive Analysis system is different from an OLAP system in terms of its use. It is used to focus on future outcomes. An OALP system focuses on current and historical data processing for analytical reporting.