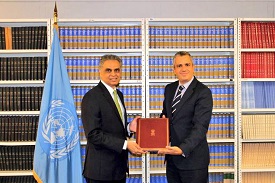 India maintained its stand on climate change, thereby ratifying the second commitment period of the Kyoto Protocol that commits countries to contain the emission of greenhouse gases.

With this decision, India became the 80th country to accept the amendment relating to the second commitment period of the Kyoto Protocol, the international emissions reduction treaty.

The Kyoto Protocol is an international agreement linked to the United Nations Framework Convention on Climate Change, which commits its members by achieving internationally binding emission reduction targets. 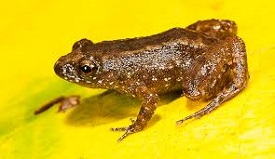 A team of Indian scientists from the Centre for Cellular and Molecular Biology (CCMB) in Hyderabad, have discovered a new species of frog that has a snout-shaped nose, just like a pig’s.

The frog has shiny, purple skin, a light blue ring around its eyes, and a pointy pig-nose. The scientists have called the new species Bhupathy's purple frog (Nasikabatrachus bhupathi).

Two new frog species were also discovered from north-eastern India: Xenophrys sanu, a resident of the Darjeeling hills in West Bengal, and Xenophrys katabhako, found in West Bengal and Sikkim.

3 - Scientists discover the largest volcanic region on Earth under Antarctica 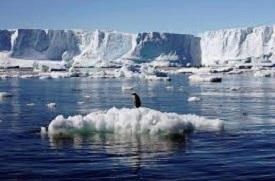 Scientists from the University of Edinburgh in Britain have discovered the largest volcanic region on Earth two km below the surface of the vast ice sheet in west Antarctica. The region has nearly 100 volcanoes.

The newly discovered volcanoes range in height from 100 to 3,850 metres, with the highest almost as tall as Switzerland's 3,970 meters Eiger mountain. These active peaks are concentrated in a region known as the west Antarctic rift system.

The minister urged upon the children to celebrate this year’s Diwali by not buying fire crackers and instead buy a gift, food items, or sweets for the poor and underprivileged children living in their locality.

As a part of the campaign, the Environment Ministry will undertake various activities to create awareness among various stakeholders and encourage people to participate in combating air pollution.

Nepal has made conservation history by becoming the first country to launch its climate-smart snow leopard landscape management plan, leading the way in safeguarding the species and its habitat.

The plan addresses key current and emerging threats to snow leopards including climate change and will be used as a model for other range countries to adopt. Nepal's conservation plan paves the way for more substantial action in securing 20 snow leopard landscapes by 2020.