1 - India gets its first Rafale 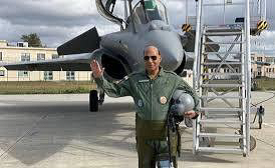 While the formal handover ceremony took place, the first batch of four Rafale jets will fly to their home base in India by May 2020. All 36 jets are expected to arrive in India by September 2022. 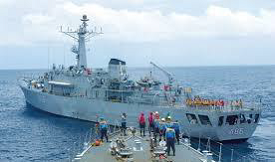 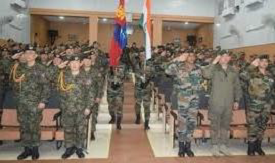 The 10th edition of the Joint Military Exercise Ekuverin between the Indian Army and the Maldives National Defence Force was organised from 07 to 20 October 2019 at Aundh Military Station in Pune, Maharashtra. Exercise Ekuverin means ‘Friends’ in the Dhivehi language.

The aim of the exercise is to conduct military training with emphasis on amphibious & counter insurgency/ counter terrorism operations with a view to enhance interoperability between the two armies. The last exercise was held in 2018 at Northern Area Headquarters, Lh. Maafilaafushi of Maldives. 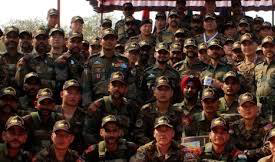 The 14th edition of Indo – Mongolian joint military training, Exercise Nomadic Elephant-XIV, was conducted at Bakloh over a period of 14 days, beginning 05 Oct 2019. The Indian Army was represented by a contingent of a battalion of RAJPUTANA RIFLES.

Nomadic Elephant-XIV is aimed at training troops in counter insurgency & counter terrorism operations under United Nations mandate. The Joint Exercise is an ideal platform for the armies of both the nations to share their experiences & best practices. 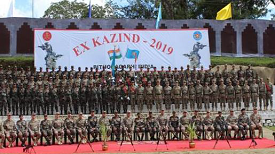 As part of exercise, important lectures, demonstrations and drills related to counter insurgency and counter terrorism operations were conducted. 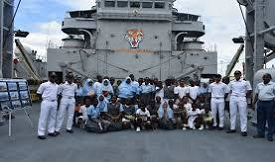 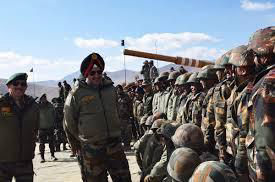 The Indian Army has started its biggest mountain assault exercise, ‘Him Vijay' in Arunachal Pradesh. The Panagarh based 17 Mountain Strike Corps will conduct Exercise HimVijay spread over a month and half with three newly created Integrated Battle Groups (IBG) involving 15,000 troops.

The IBGs are part of overall force transformation initiated by Army Chief Gen Bipin Rawat. They are brigade-sized agile self-sufficient combat formations which can swiftly launch strikes against adversary in case of hostilities. India has successfully test fired a land-attack version of Brahmos supersonic missile from Chandipur coast in Odisha's Balasore district. The missile, with a strike range of 290km, can be fired from land as well as sea-based platforms.

BrahMos now has around 65% ‘Make in India’ components. The BrahMos missile has been jointly developed by Russia and India. BrahMos is said to be one of the most potent anti-ship cruise missiles in the world and it has already been operationalised with all the three services of the Indian Armed Forces. 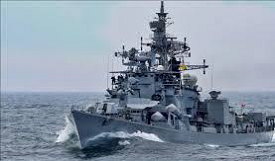 The second edition of Indian Navy (IN) – Bangladesh Navy (BN) Coordinated Patrol (CORPAT) was held in Northern Bay of Bengal. INS Ranvijay and INS Kuthar participated in the CORPAT along with BNS Ali Haider and BNS Shadinota. The two-day CORPAT was followed by the maiden edition of IN-BN Bilateral Exercise at Visakhapatnam from 12 to 16 October 2019.

The India Bangladesh CORPAT commenced in 2018. The exercise aims at development of mutual communication and sharing of best practices between the two navies. 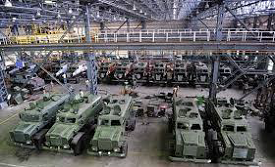 India's defence exports have grown seven times in the last two years, reaching a value of two billion dollars due to work on modalities to become a hub in top class defence production with efforts being made to increase defence exports to 5bn dollars in the near future.

Around 440 companies in the private sector have taken up defence production in the last five years for the supply of defence equipment. Artificial Intelligence, autonomous systems, cyber-defence, smart ammunition and weapons are areas in which the start ups are going to play an innovative role.

The last exercise, EX-EASTERN BRIDGE-IV was held in 2017. For the first time, MiG-29 fighter aircraft participated in an International Exercise outside India. MiG-29 exercised with Royal Air Force Oman’s Eurofighter Typhoon, F-16 and Hawk. This exercise enhanced inter-operability during mutual operations between the two Air Forces and provided an opportunity to learn from each other’s best practices. 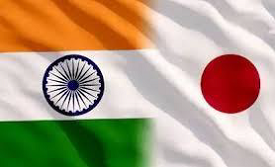 Exercise DHARMA GUARDIAN is an annual training event which is being conducted in India since 2018. The joint military exercise enhanced the level of defence co-operation between Indian Army and Japanese Ground Self Defence Forces (JGSDF) which in turn will further foster the bilateral relations between the two nations. 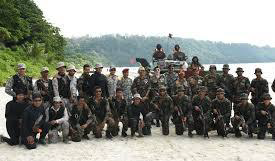 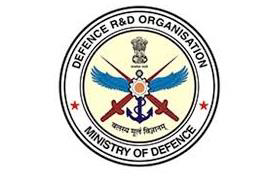 The 10th edition of the joint military exercise 'Vajra Prahar' between India and the US was held at Joint Base Lewis-McChord (JBLM) in Seattle. Vajra Prahar' is a Special Forces joint training exercise conducted alternately in India and the US meant for sharing of best practices and experience in areas such as joint mission planning capabilities and operational tactics.

'Vajra Prahar' exercise is one of the largest running joint military training and defense corporation endeavors between the two countries and an important aspect of deepening bilateral defense cooperation between India and the US. 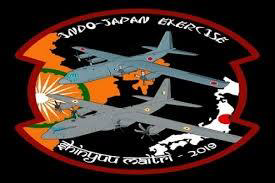 Another drill between the armies of the same countries was also carried out in the eastern theatre. The exercise enhanced the level of defence co-operation between Indian Army and JGSDF. Defence Minister Rajnath Singh approved admission of girls in Sainik schools from the 2021-22 academic session. The decision is result of the objective of the government towards greater inclusiveness, gender equality, enabling greater participation of women in Armed Forces, strengthening the motto of 'Beti Bachao Beti Padhao' and following the success of a pilot project started by the Defence Ministry for admission of girls in Sainik School Chhingchhip in Mizoram two years ago.

Sainik schools not only give public school education but also the maximum number of its cadets admission to National Defence Academy. OASIS (Officers Automated & Structured Information System) was launched on Army Intranet which has started digitising the service and personal records of its officers. Prior to this, the 1.2 lakh service records of serving and retired officers of the Indian Army were manually preserved by Manpower Planning (MP) Directorate but now records can be accessed by the Army officers themselves to check their details.

OASIS will not only allow officers to access their details but also migrate retired officers’ data from OASIS to Retired Officers Digital Records Archive (RODRA) which holds the pension details of the retired Army officers. 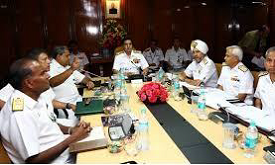 The second edition of Naval Commanders' Conference of 2019 was held at New Delhi from 22 to 24 October 2019. The conference is the apex level biannual event for interaction between the Naval Commanders for deliberation and formulation of important policy decisions.

The theme of discussions will focus on the 'Functional Reorganisation of Indian Navy towards improving Operational Efficiency' and 'Optimal Manning' wherein contemporary issues pertaining to 'operations', maintenance', 'op-logistics', 'data management' and 'improvement of organisational practices' are listed for deliberations. 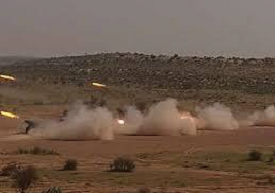 The Indian Army will conduct exercise 'Sindhu Sudarshan' in the deserts of Rajasthan, from November 29 to December 4. More than 40,000 troops will take part in the exercise. The Indian Army will carry out this exercise using its integrated battle groups which are the new formations being raised by the force for warfighting in future.

The Exercise underscores Indian Army's resolve to implement the integrated launch of Strike Corps in developed and desert terrain in consonance with its enunciated pro-active strategy using Integrated Battle Groups (IBGs) along the Western Front. 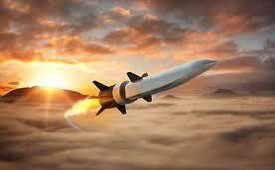 The Defence Research and Development (DRDO) has started work to produce a hypersonic weapon – missiles that can travel at five times speed of sound. A wind tunnel to test and fine-tune the technology will be operational soon.

Hypersonic weapons are touted as “next-generation” weapon systems. They are specifically designed for increased survivability against modern ballistic missile defence systems. These missiles are capable of delivering conventional or nuclear payloads at speeds not imagined hiterto over long ranges. 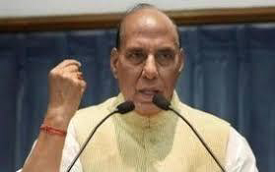 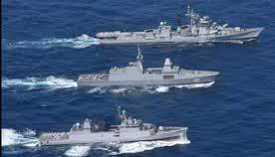 The exercise was conducted in two phases: Harbour phase and Sea Phase. The joint exercise encompassed a variety of operations including anti-air and surface firing exercises, flying exercises using integral helicopter and seamanship evolutions at sea. 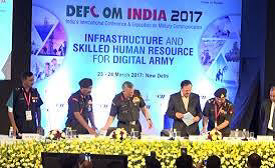 The DEFCOM 2019 is scheduled to be held on 26 and 27 November 2019 at Manekshaw Centre, New Delhi. The aim of DEFCOM 2019 is to collaborate with all stakeholders, including HQ Integrated Defence Staff, Indian Army, Indian Navy, Indian Air Force, DRDO, academia and the Industry on theways, means and ends to leverage Communications as a Decisive Catalyst for Jointness.

The outcomes and insights gained during the seminar will guide development of a joint communications framework, joint organisational structures, communications support for joint operations in both the conventional and information domain. 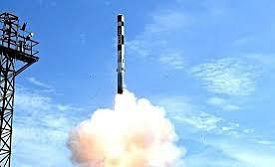 IAF had also recently successfully fired the air version of the BrahMos missile from its frontline Su-30MKI fighter aircraft in May 19 in the same area. The BrahMos missile provides Indian Air Force a much desired capability to strike from large stand-off ranges on any target at sea or on land with pinpoint accuracy by day or night and in all weather conditions.