The iconic Eden Gardens in Kolkata made history on November 22 by hosting the first-ever day-night pink ball Test match to be played on Indian soil. The pink balls for the Test are made by Sanspareils Greenlands (SG) of Meerut.

The idea of hosting day-night test match is credited to former captain and BCCI Chief Sourav Ganguly. The main aim of the idea is to attract spectators. First division leagues have been using Eden Gardens in their finals for the past three seasons. 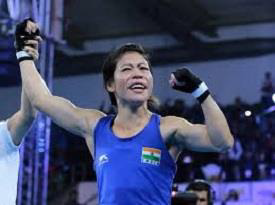 Indian Olympic boxer Mangte Chungneijang Mary Kom has been included in 10-member athlete ambassadors group to represent boxers in the build-up to 2020 Tokyo Olympics by the IOC’s Task Force for the sport. The group has 10 boxers from five regions. Mary Kom will represent the Asian bloc in the group. Other players included in this group are Ukrainian legend Vasyl La and 2016 Olympic gold-winner Julio Cesar La Cruz.

The brand ambassadors will help the Boxing Task Force take into account the athletes’ voice for the qualification events and the boxing tournament at the Olympic Games Tokyo 2020. 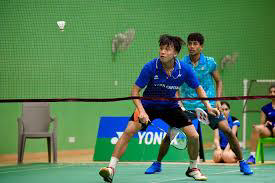 Maisnam Meiraba Luwang of Manipur, India won the boys’ singles U-19 title at the Woncheon Yonex Korea Junior Open International Challenge 2019 in Miryang, Korea. He defeated Lee Hak Joo of Korea. Sathish Kumar Karunakaran of India won the bronze in the same category at this tournament.

Luwang currently holds the No. 9 spot in the World Junior Rankings. It was his third international title this year following his triumphs at the Russian Junior White Nights 2019 and India Junior International 2019. 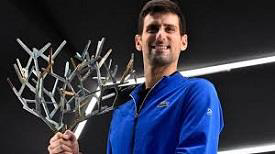 Djokovic is looking to emulate Pete Sampras by grabbing the year-end No. 1 ranking for a sixth time. He is currently tied in second place with Federer and Jimmy Connors. If Nadal takes the top spot, it’ll be his fifth time. 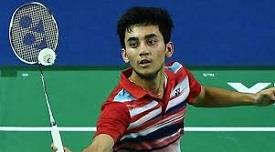 India's Lakshya Sen has won the SaarLorLux Open badminton tournament at Saarbrücken in Germany. He defeated Sen Weng Hong Yang of China. He had clinched the Belgian International challenge and Dutch Open Super Tour 100 in his last two outings. He had also reached the Polish Open final this year.

The win has helped Lakshya earn 5,500 points and propell into the top-50 of the BWF world rankings. He has progressed to 42nd position. 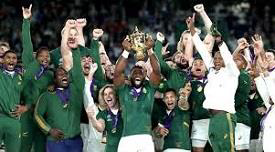 South Africa won its third Rugby World Cup championship after it defeated England 32-12. South Africa also won the title in 1995 and 2007. The name of the captain of South African team was Siya Kolisi. 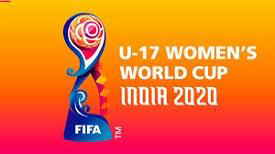 The design combines exciting and colourful elements from both the natural world and Indian culture. The bright blue waves of the base reach up along the form of the trophy toward the paisley flourish crowning the design. The droplet frames a ball made from a marigold flower. 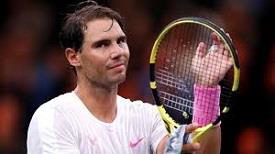 Rafael Nadal is back to the world No. 1 for the eighth time in his career in the latest ATP rankings. The Spaniard goes up one place to overtake Novak Djokovic even though Novak sealed his fifth Paris Masters title with a 6-3, 6-4 victory over Canadian Denis Shapovalov.

Nadal withdrew from his semifinal against Shapovalov in Paris. Djokovic slipped down the rankings because he lost the points that he won a year ago in London when Nadal was absent.

Gurjar came up with his season's best effort of 61.22m to claim the top spot. Singh sent the spear to a distance of 59.46m to clinch the bronze while Rinku finished fourth. India finished with two gold, two silver and five bronze in the Championship.

Shafali Verma, at the age of 15 years and 286 days, became the youngest player to score an international half-century for India. She scored a 49-ball 73 in the first T20 International against West Indies. The record while held previously by batting legend Sachin Tendulkar.

Tendulkar had notched up his maiden Test fifty at 16 years and 214 days. Shafali had earlier set a record on debut to become the youngest player to play a Twenty20 International (T20I) match for India. 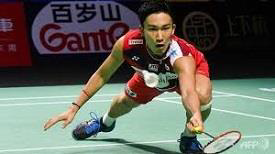 Kento Momota of Japan defeated Chou Tien-chen of Taiwan to retain his Fuzhou China Open badminton crown. This was the 10th title of the year for the world number one Momota.

The International Hockey Federation (FIH) has announced that India will host the 2023 Men's Hockey World Cup from 13th to 29th of January. Spain and the Netherlands have been named as the co-hosts of the 2022 Women's World Cup scheduled to be held from 1st to 22nd of July.

India will, thus, become the first country to stage four men’s Hockey World Cups after having hosted the showpiece in 1982 (Mumbai), 2010 (New Delhi) and 2018 (Bhubaneswar). The Netherlands’ had hosted three men’s tournaments.

The Australian women's football team, the Matildas, have struck a historic deal which will see them earn equal pay and entitlements as the men’s team. It is being hailed as a landmark for gender equality in sports. The Matildas are currently ranked 8th in the world while men's team, the Socceroos, come in 44th.

According to Football Federation Australia (FFA), Matildas stars such as Sam Kerr and Ellie Carpenter will be paid an equal amount as big-names of men’s team like Aaron Mooy and Mat Ryan. They will also be afforded business class flights to international fixtures and tournaments. 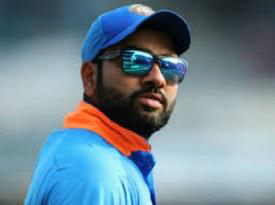 Rohit Sharma became the first Indian man and second in world cricket to complete 100 T-20 Internationals. He reached the milestone in the second match against Bangladesh at the Saurashtra Cricket Association Stadium. Shoaib Malik with 111 games from Pakistan is the only player to have played more than 100 T20 Internationals.

Rohit is currently the top-scorer in this format with 2452 runs with skipper Virat Kohli second in the list with 2450 runs. 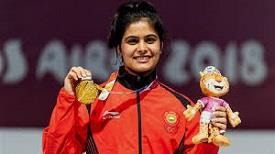 Manu Bhaker won gold in women's 10m air pistol event while Vivaan Kapoor and Manisha Keer won the yellow metal in junior trap mixed event at the Asian Shooting Championships. Manu and any other Indian shooter were ineligible to win an Olympic quota as the country has already exhausted them in earlier competitions.

Manu put up a dominant showing, shooting 584 in qualification and 244.3 in the final to take gold. Chinese Asian Games champion Wang Qian took the silver. 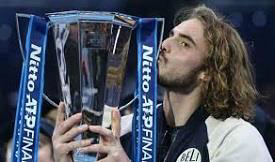 French duo Nicolas Mahut and Pierre-Hugues Herbert won the doubles title by beating Raven Klaasen of South Africa and Michael Venus of New Zealand. The 2019 ATP Finals was a men's tennis tournament played at the O2 Arena in London. It was the season-ending event for the highest-ranked singles players and doubles teams on the 2019 ATP Tour.

India’s Laishram Sarita Devi of Manipur was elected unopposed as a member of the AIBA Athletes Commission. She was among the six boxers from 5 continents who were elected as members of the commission. The election of the Athletes Commission members was organized during AIBA Men and Women World Boxing Championships 2019 in Russia.

Boxers from all over the world voted for new members - one per continent, except Europe which has two representatives. 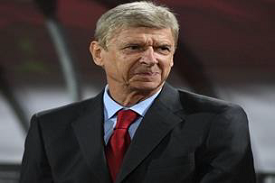 FIFA has named Arsene Wenger new Chief of Global Football Development. Wenger will be chiefly responsible for overseeing and driving the growth and development of the sport for both men and women around the world.

Known as Le Professeur for his meticulously studious approach to the game, Wenger has spent his whole career in football. He won three Premier League titles while as Manager with Arsenal along with 7 FA Cups and made the Gunners one of the strongest sides in Europe. 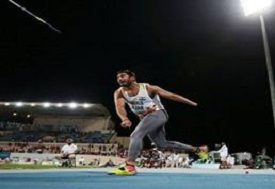 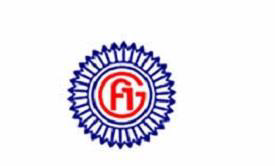 Manipur’s former gymnast Shantikumar Singh served as GFI Treasurer from 2011 to 2015 and then got elected as Secretary in the 2015 elections. 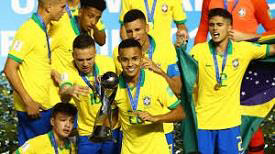 The Brazilian football team defeated the football team of Mexico in the finals for 2-1, to win the 18th edition of the FIFA under 17 World Cup trophy held in Brasilia, Brazil. The victory added to Brazil's successes in 1997, 1999 and 2003 as it moved within one of Nigeria's record of five championships. 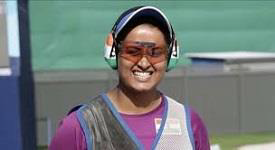 Shreyasi Singh won the women's Trap crown at the ongoing 63rd National Shooting Championship for shotgun events. Shreyasi, representing Bihar, got the better of Rajeshwari Kumari of Punjab in the top final. She shot 42 out of 50 birds to claim the medal. This was Shreyasi's fourth individual career National title but her first in Women's Trap.

Pragati Dubey of Madhya Pradesh won bronze with a finals score of 31. Varda Sharma of Delhi won the Junior Women's Trap competition. The Punjab team totaled 319 to leave Rajasthan way behind with 311 and the silver medal. 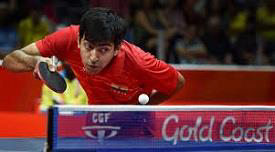 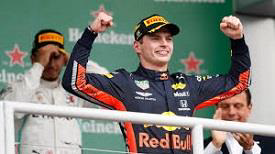 Red Bull’s Max Verstappen won the F1 Brazilian Grand Prixat Interlagos in São Paulo, Brazil. The win was the eighth of his career, third of the season but first from pole. Verstappen was followed by Pierre Gasly (France) and Carlos Sainz Vázquez de Castro (Spain) in the second and third place respectively. 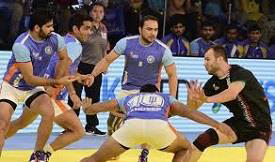 The 2019 circle Kabaddi World Cup will be orgainsed by the Punjab government to be held from December 1 to 9, 2019 tournament will be dedicated to the 550th birth anniversary of Sikh guru, Guru Nanak Dev ji. Shaheed Bhagat Singh Sports Stadium in Dera Baba Nanak will host the closing ceremony of the tournament. Teams of around 9 countries will participate in the tournament, however Pakistan and Canada are yet to get clearance from the Indian government.

The competition has been previously contested in 2004, 2007 and 2016. All the tournaments have been won by India. 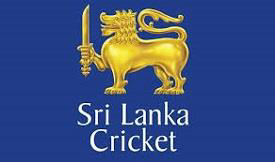 Sri Lanka became the first South Asian nation to bring match-fixing cases to the category of crime as its parliament passed a bill related to ‘Prevention of Offences Related to Sports’.

According to new bill ‘Prevention of Offences Related to Sports’, if a person is found guilty of committing an offence related to corruption in sports, he/she will be jailed for a term up to 10 years and will also be required to pay various fines. The bill includes failure to report corrupt approaches. 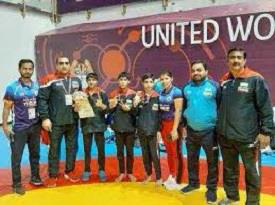 In wrestling, Indians grapplers continued their golden rush at the Under-15 Asian Wrestling Championships in Taichung, Chinese Taipei, clinching six gold medals. Akash defeated Daiki Ogawa of Japan in the 48kg category, Ankit Gulia defeated Korganov of Kazakhstan to win the gold in the 68kg while Chirag Dhalia clinched a gold by winning both his bouts in 75kg. 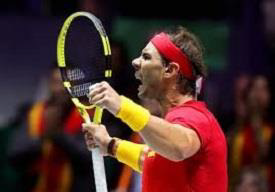 The world number one Nadal has won all eight of his rubbers to help Spain to a first title since 2011. In 2019, Nadal had an extraordinary year as he won the French Open and the US Open, made the Australian Open final and also reached the Wimbledon semifinals. 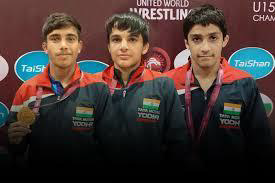 In wrestling, India concluded its campaign at the Under-15 Asian Championships with 28 medals, including 13 gold, 14 silver and a bronze. Led by 2019 Cadet World Championships bronze medallist Deepak Chahal, the freestyle grapplers captured four gold while one gold came in the Greco-Roman category.Chahal won the gold in 75kg, Vishal in 62kg, Sagar Jaglan in 68kg and Jatin in 85kg were the others who finished on the top podium.

For the first time, India finished on top of the team rankings in freestyle category with 225 points. Kazakhstan finished second while Japan was third. 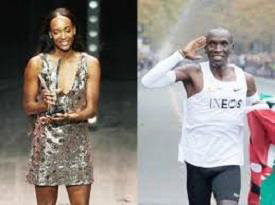 American Muhammad won her award owing to a world record of 52.20 seconds at the US Trials in Iowa in July. 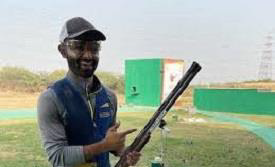 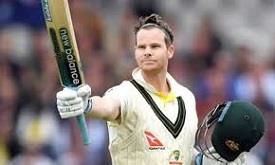 Australia’s Steve Smith became the fastest batsman to reach 7000 Test runs in Australia vs Pakistan 2nd Test. He achieved the feat on day two of the ongoing pink-ball Test at the Adelaide Oval against Pakistan. Steve Smith achieved the milestone in just his 126th innings, whereas two other Indian cricketers Virender Sehwag and Sachin Tendulkar had reached the milestone in their 134th and 136th innings respectively.

Steve broke a record that had stood since 1946, while moving past Donald Bradman to become Australia’s 11th highest scorer.