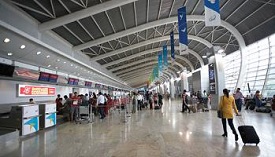 In recent years, different authorities including government of India has taken various step to curb the use of single-use plastic items. Furthermore, on the basis of third-party assessment carried out by Quality Council of India (QCI), airports of the following cities have been declared “Single-Use Plastic Free:”

With the increase in air pollution, Government of India launched a comprehensive PAN-India air pollution abatement scheme in 102 cities under National Clean Air Programme (NCAP) across the country.

The Government has announced that under the NCAP mid-term (five year) pollution reduction target and strategies, by 2024, pollution will be cut by 30%.

The following features will be added under the scheme −

The programme will also get support from the following international agencies −

It has been estimated that the Chilika Lake covers an an area of 152 square km with seagrass. The area supposedly claims 20% of India’s total seagrass distribution. Seagrass plays vital role in oxygen production and absorption of CO2. Because of this property, seagrass is known as purifier in aquatic ecology.

As per the report of Chilika Development Authority, the apex body for the Lake’s management, the coverage area includes different species of seagrass such as −

The area has now reportedly increased from 135 square km. to 152 square km. in the last one year. 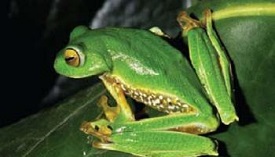 According to IUCN, about 40% amphibians across the globe are critically endangered (i.e. threatened with extinction). The International Union for Conservation of Nature (IUCN) is an international organization, which works in the field of nature conservation and sustainable use of natural resources. Periodically, it releases ‘Red List’ illustrating the status of different species across the world. So, the IUCN Red List is an indicator of the health of the world’s biodiversity.

5 - Greenland’s Melting Ice About to Reach at ‘Tipping Point’ 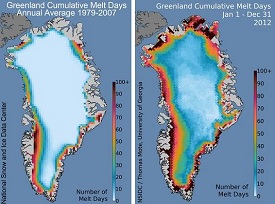 As per a recent report, the huge ice sheet of Greenland is melting with an accelerated rate, as it may have reached at a “tipping point.” Because of such accelerated melting of huge ice sheet, it may cause global sea-level rise in the next two decades.

Further, the report shows that the Arctic region (Greenland is located in the Arctic region), is warming at twice the average rate of the rest of the region of the Earth. The researchers have found that the loss of ice in 2012 was more than 400 billion tons per year, which was nearly four times higher the rate of 2003.