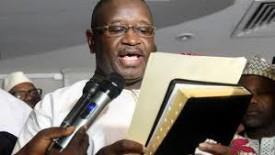 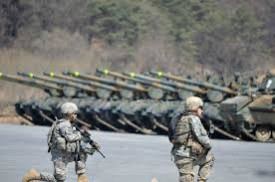 More than 11,500 U.S. troops and nearly 300,000 South Korean forces took part in the four-week exercises. The joint exercises come roughly a month ahead of an April 27 summit between the two Koreas. 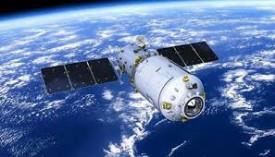 China’s prototype space station, Tiangong 1, burnt up in the skies over the southern Pacific Ocean. The Tiangong-1 was last used by astronauts in 2013, when a three-strong team spent 12 days on the vessel conducting experiments.

The space lab, its name translating to "Heavenly Palace," was launched in September 2011 as a prototype for China's ultimate space goal: a permanent space station is expected to launch around 2022.

Nepal has launched its first “accessible” trekking trail in Pokhara city for the differently-abled and the elderly. The trail offers a magnificent view of Mt. Annapurna, Mt. Fisthtail and Mt. Manaslu Himalaya range.

'Accessible tourism' is an emerging concept to ensure that tourist destinations, products and services are accessible to all people, irrespective of their physical limitations, disabilities or age.

In an effort to narrow the gender gap in the United Arab Emirates, the Cabinet approved the issuance of the Law on Equal Wages and Salaries for Men and Women. The new law will provide women with equal opportunities as partners in the UAE’s development. It will further empower women to lead future national strategies and ambitious projects.

UAE Cabinet’s approval of the Law on Equal Wages and Salaries comes in line with the government’s objective to ensure the protection of women's rights and support their role in the national development process. 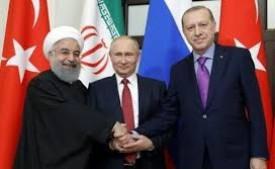 In order to discuss critical bearing on developments in Syria, second tripartite summit was held in Turkey, involving Presidents of Iran, Turkey and Russia. It bwas second meeting in 6 months. The three countries discussed peace process for Syria and enhance their influence in Syria.

Since US had withdrawn its troops from Syria, it was decided in the meeting that Turkey and Russia would continue their cooperation to bring up critical developments in Syria.

7 - Singapore and China inked MoU along belt and road initiative 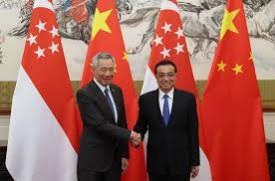 In order to boost cooperation on Belt and Road Initiative project, Singapore and China signed an MoU in Beijing, China. As per the MoU, the Ministry of Trade and Industry (MTI), NDRC and Enterprise Singapore will form a working group to promote co-operation between companies from both the nations, includes agreements for a joint training of officials from the BRI countries and look for business opportunities to facilitate third-party market cooperation.

The Belt and Road Initiative is a mega project to connect countries across Europe, Africa and Asia together via ancient land and sea trade routes.

In order to address the issues relating to human rights and impunity in South Asia, an international conference was organized, which was hosted by National Human Rights Commission, Nepal. It was attended by over 50 representatives from 20 countries such as India, Afghanistan, Bangladesh, Bhutan, Maldives, Pakistan, Sri Lanka, Malaysia, Myanmar, Philippines. The conference was based on theme "Identifying Challenges, Assessing Progress, Moving Forward: Addressing Impunity and Realizing Human Rights in South Asia".

9 - Conference on water, environment and climate change held in Nepal 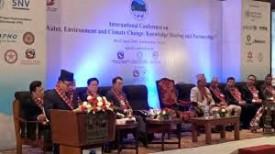 Department of Water Supply and Sewerage, Govt of Nepal in association with the Society of Public Health Engineers Nepal (Sophen) and Nepal Engineers Association organized three-day international conference on water, environment and climate change in Kathmandu. The conference was organized on theme ‘Water, Environment and Climate Change: Knowledge Sharing and Partnership’. 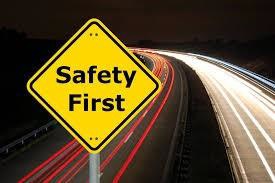 The United Nations Road Safety Trust Fund, launched by United Nations aims to accelerate progress in improving global road safety by bridging the gaps in the mobilization of resources for effective action at all levels. The trust fund is being established at the request of the Secretary-General following the suggestion made by United Nations Member States. 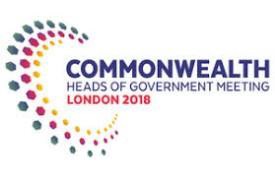 The members discussed thoughts for building understanding and cooperation towards realising global goals for social and political progress, inclusive prosperity, and sustainable development. 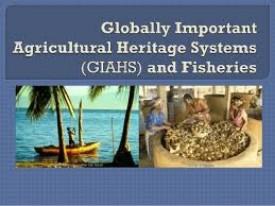 Since 2016, fourteen new sites have been designated as Globally Important Agricultural Heritage Systems, including the first ones in Europe. As with other designated sites, these systems highlight agricultural traditions that promote sustainability, safeguard biodiversity and protect the environment while supporting the social and economic development necessary for stable, decent livelihoods.

The 14 new sites range from oases to rice terraces, wasabi cultivation to raisin production. A GIAHS is a living, evolving system of human communities in an intricate relationship with their territory, cultural or agricultural landscape or biophysical and wider social environment.

President Assad was decorated with the highest class of the award, the Grand Croix, in 2001 after he took power following the death of his father. France recently joined the US and Britain in bombing Syrian targets over an alleged chemical weapons attack. 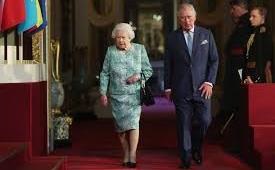 Britain's Prince Charles will succeed his mother Queen Elizabeth II as the Head of the Commonwealth after the heads of government agreed on his succession. The Commonwealth leaders have reached an agreement on the succession of the 69-year-old heir to the British throne at a closed-door Commonwealth Heads of Government Meeting retreat in Windsor Castle.

The Commonwealth is a group of 53 nations, of which 16 have the Queen as Head of State. 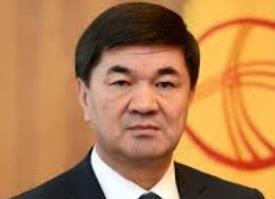 Kyrgyzstan's Parliament has named Mukhammedkaliy Abylgaziyev as the new Prime Minister after his nomination by the Social Democratic party which leads the ruling coalition. He replaced Sapar Isakov whose cabinet lost a no-confidence vote.

Abylgaziyev was previously Chief of Staff in President Sooronbai Jeenbekov's office. Abylgaziyev is the the 30th prime minister of the country. The April 19 no-trust vote was the first in the history of Kyrgyzstan.

King Mswati III of Swaziland has renameed his country as eSwatini.The King announced it during celebrations marking the monarch's birthday as well as 50 years of independence from British colonial rule.

Meaning "place of the Swazi", eSwatini is the Swazi language name for the country.Swaziland is a tiny state landlocked between South Africa and Mozambique. The other African nations to have adopted a new name after Independence are: Rhodesia became Zimbabwe, Nyasaland became Malawi, and Bechuanaland became Botswana.

The first women’s foreign ministers’ meeting will be a unique opportunity to bring all women foreign ministers together to discuss today’s pressing global challenges and to harness the incredible expertise of this group of world leaders.

Benitez will replace outgoing President Horacio Cartes. Paraguay is a landlocked country, sandwiched between Argentina, Bolivia and Brazil. The nation is marred by persistent poverty, corruption and drug trafficking. In Paraguay, 43 percent of the population is aged between 18 and 34.

France's National Assembly has passed a controversial immigration law in a vote of 228 in favour, 139 against and 24 abstentions. The bill shortens asylum application deadlines, doubles the time for which illegal migrants can be detained and introduces a one-year prison sentence for entering France illegally.

The main aim of the law is to cut the length of asylum applications. It will also help make the deportation system more efficient for those rejected. 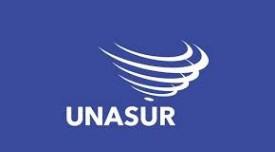 Argentina, Brazil, Chile, Colombia, Paraguay and Peru have suspended their memberships from the Union of South American Nations, or UNASUR. The member nations had differences over selecting the secretary general of the group.

The other nations to continue with the bloc are Bolivia, Ecuador, Guyana, Surinam, Uruguay and Venezuela. UNASUR was promoted by late Venezuelan President Hugo Chavez to counter U.S. influence in the region. 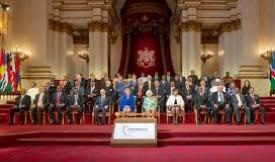 Commonwealth countries have unanimously committed to take action on cyber-security by 2020 following a landmark declaration. The 53 leaders agreed to work closely together to evaluate and strengthen their cyber-security frameworks and response mechanisms. The Commonwealth Secretariat will provide technical assistance to countries on cybercrime and cyber-security capacity building.

The declaration is the world’s largest and most geographically diverse inter-governmental commitment on cyber-security cooperation. The UK government has pledged up to £15 million to help Commonwealth countries strengthen their cyber-security capabilities. 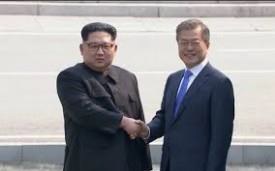 North Korean leader Kim Jong Un and South Korea's President Moon Jae-in held a historic summit. They met on the northern side of the border in the truce village of Panmunjom. The two leaders agreed to pursue a permanent peace and the complete denuclearisation of the divided peninsula. 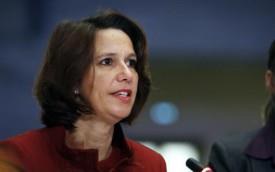 UN Secretary-General Antonio Guterres has appointed Christine Schraner Burgener of Switzerland as his new special envoy on Myanmar. Prior to her appointment, Burgener was the Ambassador of Switzerland to the Germany since 2015.

The announcement of Burgener's appointment comes as the Security Council sends a mission to Iraq, Bangladesh, and Myanmar from April 26 to May 2. Since August 2017, nearly 700,000 minority Muslim Rohingyas have fled violence in Myanmar across the border into Bangladesh's Cox's Bazar. 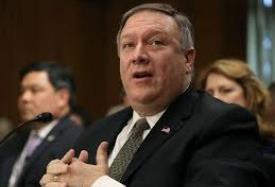 Mike Pompeo has been sworn in as America's 70th Secretary of State, after the US Senate confirmed his nomination. Pompeo, the former CIA director, was confirmed by the Senate by 57-42 votes. He replaced Rex Tillerson, who was fired by President Donald Trump. 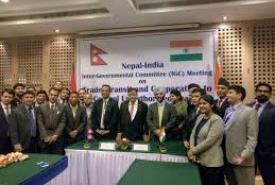 India-Nepal Inter Governmental Committee (IGC) meeting on trade, transit and cooperation to Control Unauthorised Trade was held in Kathmandu. The 2 day meeting focussed on further strengthening trade and investment ties between both the countries.

The IGC meeting is a platform to discuss and resolve issues relating to bilateral trade, transit facilities provided by India to Nepal to facilitate trade with third countries. Indian side was led by Commerce Secretary Rita Teaotia. 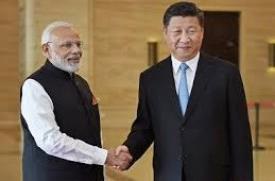 A significant outcome of the meeting between Prime Minister Modi and Xi Jinping was to issue strategic guidance to their militaries to strengthen communication. Both the leaders discussed issues like trade and investment, climate change and digital empowerment in their wide ranging talks in Wuhan.