A Bipolar Junction Transistor (BJT) is a transistor whose operation depends on the contact made by two semicondutors. It can act as a switch, amplifier or oscillator. It is known as a bipolar transistor since its operation requires two types of charge carriers (holes and electrons). Holes constitute the dominant charge carriers in P-type semiconductors while electrons are the main charge bearers in N-type semiconductors.

Symbols of a BJT

Structure of a BJT

A BJT has two P-N junctions connected back to back and sharing a common region B (base). This ensures contacts are made in all the regions that are base, collector and emitter. The structure of a PNP bipolar transistor is shown below. 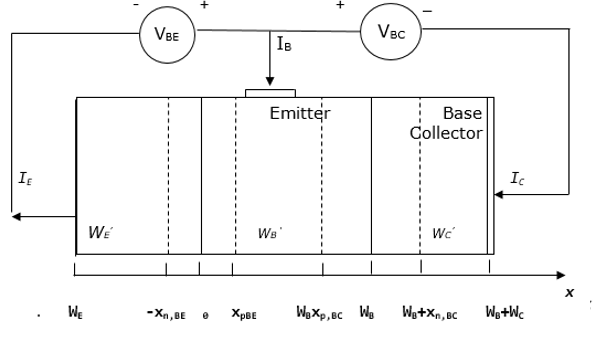 The BJT shown above consists of two diodes connected back to back, resulting in the depletion of the regions called quasi-neutral. The width of quasi-neutral of the emitter, base and collector are indicated above as WE’, WB’ and WC’. They are obtained as follows −

When a positive voltage is applied to the base contact relative to the collector and emitter, the base-collector voltage as well as base-emitter voltage becomes positive.

For simplicity, VCE is assumed to be zero.

Diffusion of electrons occur from the emitter to the base while diffusion of holes originates from the base to the emitter. Once the electrons reach the base-collector depleted region, they are swept through the region by an electric field. These electrons form the collector current.

The total collector current is given by the electron diffusion current (IE,n), less the base recombination current(Ir,B).

This is given by the ratio of the collector current and the emitter current.

Applying the Kirchhoff’s current law, it is found that the base current is given by the difference between the emitter current and the collector current.

This is given by the ratio of the collector current to the base current.

The above explains how a BJT can produce current amplification. The transport factor (α) approaches one if the collector current is almost equivalent to the emitter current. The current gain (β) thus becomes greater than one.

The following is a summary of the discussed emitter efficiency, base transport factor and depletion layer recombination factor.