Versions are also known as Releases. They are set of targets to achieve/resolve issues. These can be maintained in versions.

Project updates and development are organized into several releases or versions. Versions can be named as 1.0, 1.1 or may be based on the release dates of functionalities as '20171020'.

Versions are used for all version-related fields in issues. Versions will appear in issues only when the project has a version. The user needs to create a version in the project to utilize this functionality.

In the issue form, there are 3 fields related to versions - Product Version, Target Version, and Fixed-in Version.

Product Version notes in which version the issue was discovered and logged by the users.

Target Version is a future or current version to display in which version the issue is scheduled to fix. This automatically populates the project Roadmap.

Fixed-in Version shows in which version the issue was actually fixed or implemented. This automatically populates the project Change log.

Step 1 − To add or update the version of a project, go to Manage → Manage Projects tab.

Step 2 − Click the Project name, where the version has to be added.

Step 3 − Scroll down to the Versions section.

The following screenshot shows how to navigate to Versions. 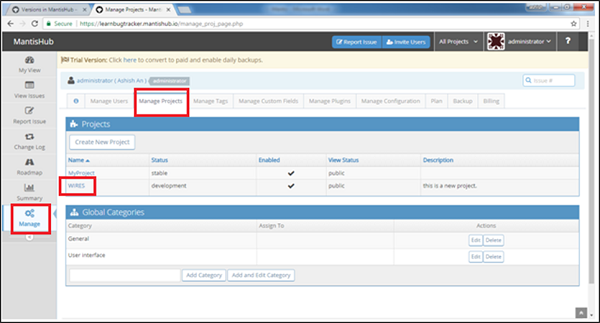 The following screenshot shows how to add Version by writing the Version Name and click Add Version. 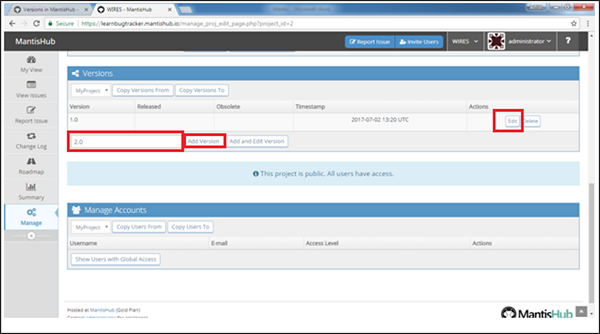 Step 4 − To update a Version, click the Edit button as shown above.

Step 5 − The user can update all the fields based on the requirement. Click Update Version as shown in the following screenshot. 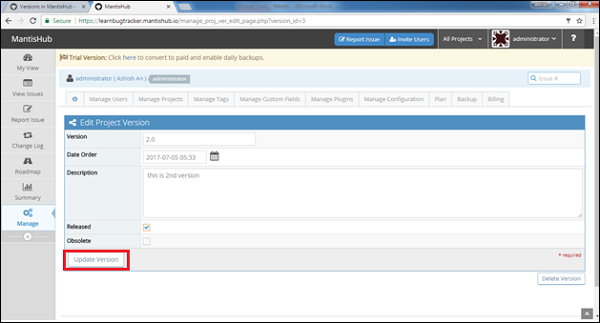