1 - "Vivekadeepini" book released by the Vice President of India 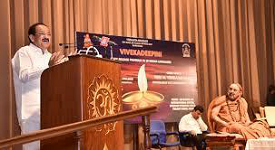 The Vice President, Shri M. Venkaiah Naidu released the book ‘Vivekadeepini’ in ten languages, a concise book of aphorisms that contains glimpses of India’s wisdom, published by Vedanta Bharati, in New Delhi. The book will enable a wider audience to appreciate the classic work, ‘Prashnottara Ratnamalika’ written by one of India’s greatest spiritual and literary geniuses, Sri Adi Sankaracharya.

Drawn from the 67 verses of Prashnottara Ratnamalika written by Adi Shankaracharya, the Vivekadeepini is a compilation of select 36 verses which are in the question-answer format. These pieces of wisdom have universal relevance irrespective of religion or community. 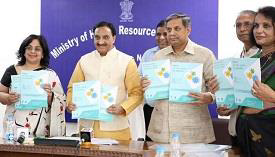 The tudent Induction Programme is intended to empower the aspirant learners to face the Competitive world with confidence, open new horizons of life leading to character building based on Universal Human Values such as Truth, Righteous conduct, Love, Non-violence, Peace and assist in developing self awareness , compassion and oneness. 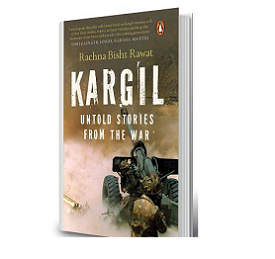 The book features stories of "extraordinary human courage" of not just the men in uniform, but of their families too. The Kargil war lasted for nearly three months, initiated in May of 1999 in an effort to displace Pakistani soldiers from the peaks they had occupied on the Indian side of the Line of Control (LoC).

4 - Aditya Birla World Academy featured in book ‘The Commonwealth At 70: From Westminster’

'The Commonwealth at 70: From Westminster to the World' book details the founding of the Commonwealth in its modern form in 1949. Aditya Birla World Academy is India's leading International school based in Mumbai.

Minister of Textiles and Minister of Women and Child Development, Smriti Zubin Irani, launched new book "Whispers of Time” authored by Dr. Krishna Saksena. 91 years aged Dr. Krishna Saksena is the first woman candidate from Uttar Pradesh to get a Ph.D. degree in English Literature in 1955.

"Whispers of Time” is ninth book written by Krishna Saksena based on true facts and events of her life experience. The book inspires to bring change in our Indian value system from one generation to the other. 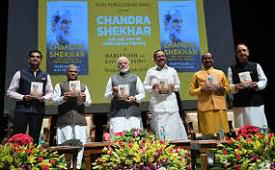 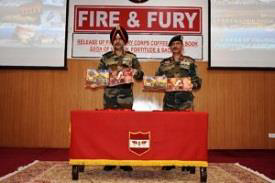 On the occasion of 20th anniversary celebrations of Kargil Vijay Divas, Northern Army Commander Lieutenant General Ranbir Singh released a coffee table book titled 'Fire and Fury Corps -- Saga of Valour, Fortitude and Sacrifice'. The book envisages the history and bravery of the Fire and Fury Warriors, which courageously protects the Line of Control (LoC), and Line of Actual Control (LAC) in Ladakh region of Jammu and Kashmir. It describes the rich heritage history of Indian Army.