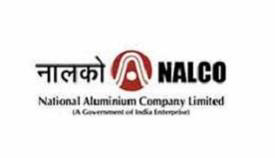 Odisha-based Navaratna Company NALCO has been selected for President's award for utilisation of Corporate Social Responsibility (CSR) fund in social development. NALCO started a scheme "Aliali Jhia" in 2015 to adapt and promote the poor and talented girls for education.

Under this scheme, 416 girls from BPL families of 66 villages of Anugul, Damanjodi and Potangi area in Anugul and Koraput districts have been adopted by the Company. These girls are studying in 45 different schools.

The Sports Journalists Federation of India honoured the Indian sports-persons for their contribution at national and international scene through SJFI Awards 2019. The list of awards and winners −

The summit highlighted bilateral cooperation, trade and investment, strategic energy ties, manufacturing and innovation partnership. The US-India Strategic Partnership Forum is committed to creating the most powerful strategic partnership between the U.S. and India. 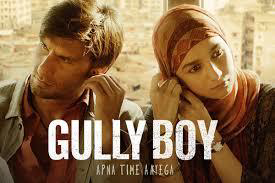 Indian movie, Gully Boy, has won the NETPAC (Network for The Promotion of Asian Cinema) Award at the 23rd Bucheon International Film Festival in South Korea. Directed by Zoya Akhtar, the film starred Ranveer Singh and Alia Bhatt and is based on the lives of street rappers. The trophy is presented by the jury.

A unique strategy adopted by the Northeast Frontier Railway to keep wild elephants away from train tracks has won the 'Best Innovation Award' by the Indian Railways. The award comprises of a citation and a cash award of Rs 3 lakh.

Plan Bee is an amplifying system that imitates the buzz of a swarm of honey bees to keep wild elephants away from railway tracks. NFR now has 46 such devices installed at vulnerable points. 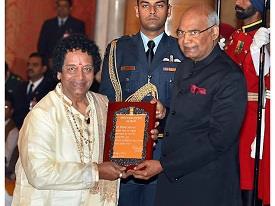 The academy also selected forty-four artists from the field of Music, Dance, Theatre, Traditional/Folk/Tribal Music/Dance/Theatre, Puppetry and Overall contribution/scholarship in the Performing Arts for the Sangeet Natak Akademi Awards (Akademi Puraskar) for the year 2018. The honour of Akademi Fellow carries a prize money of Rs.3,00,000/- and Akademi Award carries Rs 1,00,000/-, besides a Tamrapatra and Angavastram.

The Sangeet Natak Akademihas selected 32 (Including one joint Awards) artists of India who have made a mark as young talents in their respective fields of the performing arts for Ustad Bismillah Khan Yuva Puraskar 2018. It carries a purse money of Rs 25,000/-.

The recipients were as follows −

The film had won four National awards in 2018. The movie directed by Kaushik Ganguly is a love story of a transwoman and a flautist starring Riddhi Sen and Ritwik Chakraborty. 'Na Bole Wo Haram', a 20-minute film by debutant director Nitish Patankar, bagged the 'Best Short Film' award, while 'Walking With the Wind' by Praveen Morchhale received the Special Jury award for direction and story. 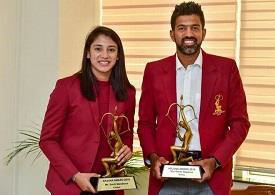 Smriti Mandhana and Rohan Bopanna were awarded with Arjuna Awards 2018 for their outstanding achievements in the sports disciplines of Cricket and Tennis respectively.

Smriti Mandhana is first Indian woman to achieve a double-hundred in a one-day game. She was given Best International Cricketer (Women) Award by BCCI for 2017-18. Rohan Bopanna is fourth Indian Player to win a Grand Slam (French Open) Title in Mixed Doubles in 2017. He won gold Medal in Men’s Doubles in Asian Games 2018.

The "Find the Incredible You" campaign of the Tourism Ministry, has won the Pacific Asia Travel Association (PATA) Gold Award, 2019. The campaign focused on digital and social media and the promotion of niche tourism products of the country. The campaign won the award under the "Marketing - Primary Government Destination" category.

The campaign strategy was to shift the focus from the external experience of tourist destinations to the internal experience of travelers themselves. PATA Gold Awards are given to tourism industry organizations and individuals making an outstanding contribution throughout the Asia Pacific Region. 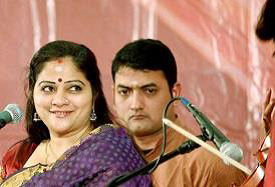 Nagaswaram player Vyasarpadi Kothandaraman and vocalist Rajkumar Bharathi will get the TTK awards. The Nritya Kalanidhi award for Dance will be conferred on Priyadarshini Govind. Sangita Kalanidhi is the title awarded yearly to a Carnatic Musician by the Madras Music Academy.

12 - Sudarsan Pattnaik honored with Peoples Choice Award in the U.S. 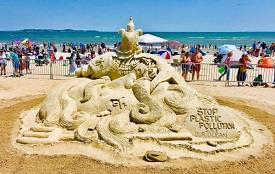 Indian sand artist Sudarsan Pattnaik was honored with People's Choice Awards 2019 at the Revere Beach International Sand Sculpting Festival held in Boston, Massachusetts. He designed a turtle caught in plastic bag and a fish having plastic thrash inside its body, being consumed by a human on the other end. Sudarshan gave a message that showed how human activities are destroying oceans and how humans are getting affected by consuming polluted sea food.

The People's Choice Award, is an American awards show, recognizing people in entertainment, voted online by the general public and fans. 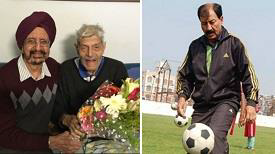 July 29 is celebrated as the 'Mohun Bagan Day' because on this day in 1911, the Mariners became the first club to defeat a British club, East Yorkshire Regiment, and lift the IFA Shield.

The inaugural Nishagandhi Sangeetha Puraskaram was given to musicians Parassala B. Ponnammal and T V. Gopalakrishnan at the five-day music festival Nishagandhi Monsoon Ragas at Nishagandhi Auditorium. The award carries a cash prize of ₹1.5 lakh, citation and memento.

The award is instituted by Kerala Tourism. Parassala B. Ponnammal has made immense contribution in classical music as an artist and as a teacher. She is the first lady principal of R.L.V. College of Music and Fine Arts. Mridangam Maestro T V. Gopalakrishnan is a first to get doctorate for his research in ‘Layathwam in Carnatic music’.

The third edition of ‘The CSR Journal Excellence Awards’ was organized in New Delhi. The theme of the event was ‘India First’ with a focus on ‘Women Empowerment’. It honored top initiatives undertaken by India Inc. as part of their Corporate Social Responsibility. The awardees are −