Abu Dhabi hosted some of the world’s top sporting events, such as the FIFA Club World Cup 2017 and 2018, the first edition of the UAE Tour, the AFC Asian Cup 2019, the Special Olympics World Games 2019, the UFC 242 showdown and the Brazil vs. South Korea international friendly match.

3 - Human Library event to be held in Mysuru

Human Library, a concept which seeks to replace books with humans, was held in the City of Palaces, Mysuru, Karnataka. The first event of Human Library aimed to break past long-standing prejudices and stereotypes by creating a safe framework for conservation by using a library analogy of lending people rather than books.

Human Library was initially launched in the year 2000 and currently exists in more than 85 countries, known as The Human Library Organization. In India, Human Library is spread across various metropolitan cities including Hyderabad, Mumbai, Delhi, Bengaluru. 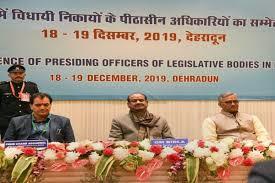 79th Conference of Presiding Officers of Legislative Bodies was held in Dehradun, Uttarakhand. The presiding officers of all state legislatures participated in the conference and discussed the agenda 'Tenth Schedule to the Constitution and the role of the Speaker'. Tenth schedule of the Constitution deals with disqualification of members of parliament or members of state legislatures on the basis of change of party.

The aim of the conference was to run democracy properly under parliamentary rules and that zero hour is an important aspect in functioning of parliament.

The Archaeological Survey of India (ASI) has discovered the earliest Sanskrit inscription in South India which is also an earliest epigraphic evidence for the Saptamatrika cult. Saptamatrikas are a group of seven female deities worshipped in Hinduism. Epigraphy is the study of ancient inscriptions that clarify their meanings according to dates and cultural contexts, and drawing conclusions about the writing and the writers. 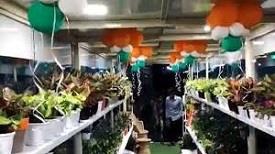 In a unique initiative to battle rising air pollution in cities, Indian Railways has opened an 'Oxygen Parlour' at Nashik railway stationto provide an experience of breathing clean air to the commuters. Airo Guard in collaboration with the Indian Railways has come up with this initiative, on recommendation of National Aeronautics and Space Administration (NASA).