1 - Gitega – The New Capital of Burundi 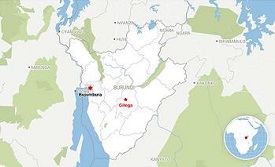 In an announcement, Burundi declared that its small central city namely Gitega as the country's new political capital. The government also announced that the current capital namely Bujumbura, located on the north-eastern shore of Lake Tanganyika, would in future function solely as the country's economic centre.

Bujumbura, at present, is considered as an opposition stronghold where the president spends a lesser time.

The capital of United Kingdom has been named as the best city in the world. London ranked first by considering the index that measures visitor and resident experiences in the subcategories of Shopping, Culinary, Nightlife and Culture, where the city placed no lower than third, globally.

London’s magnetism (first rank) is positively centered around visitors streaming into the city in record volumes i.e. 19.8 million in the year 2017. This figure was almost a million more than the record set the previous year.

The tourist boom drove strong sales for British luxury brands such as Burberry, which helped propel Bond Street in London into the top three of the world’s most expensive store locations, overtaking Paris’ Champs-Élysées. Tourists, predominantly from other European countries, from the United States and from China, visit city to buy luxury designer brands for prices much lower than they can get at their home shops.