In this chapter, let us go through different interesting topics such as the properties of radio waves, the propagation of radio waves and their types.

Radio waves are easy to generate and are widely used for both indoor and outdoor communications because of their ability to pass through buildings and travel long distances.

The key features are −

In the VLF, LF and MF bands the propagation of waves, also called as ground waves follow the curvature of the earth. The maximum transmission ranges of these waves are of the order of a few hundred kilometers. They are used for low bandwidth transmissions such as Amplitude Modulation (AM) radio broadcasting.

The HF and VHF band transmissions are absorbed by the atmosphere, near the Earth's surface. However, a portion of the radiation, called the sky wave, is radiated outward and upward to the ionosphere in the upper atmosphere. The ionosphere contains ionized particles formed due to the Sun's radiation. These ionized particles reflect the sky waves back to the Earth. A powerful sky wave may be reflected several times between the Earth and the ionosphere. Sky waves are used by amateur ham radio operators and for military communication.

In Radio communication systems, we use wireless electromagnetic waves as the channel. The antennas of different specifications can be used for these purposes. The sizes of these antennas depend upon the bandwidth and frequency of the signal to be transmitted.

In these frequency ranges, communication signals practically propagate around the world. The channel band widths are small. Therefore, the information is transmitted through these channels has slow speed and confined to digital transmission.

This is better understood with the help of the following diagram.

The figure depicts this mode of propagation very clearly. The line-of-sight propagation will not be smooth if there occurs any obstacle in its transmission path. As the signal can travel only to lesser distances in this mode, this transmission is used for infrared or microwave transmissions.

Ground wave propagation of the wave follows the contour of earth. Such a wave is called as direct wave. The wave sometimes bends due to the Earth’s magnetic field and gets reflected to the receiver. Such a wave can be termed as reflected wave.

The above figure depicts ground wave propagation. The wave when propagates through the Earth’s atmosphere is known as ground wave. The direct wave and reflected wave together contribute the signal at the receiver station. When the wave finally reaches the receiver, the lags are cancelled out. In addition, the signal is filtered to avoid distortion and amplified for clear output.

Sky wave propagation is preferred when the wave has to travel a longer distance. Here the wave is projected onto the sky and it is again reflected back onto the earth. 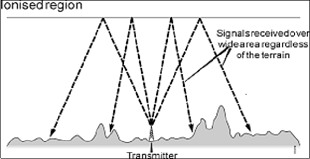 The sky wave propagation is well depicted in the above picture. Here the waves are shown to be transmitted from one place and where it is received by many receivers. Hence, it is an example of broadcasting.

The waves, which are transmitted from the transmitter antenna, are reflected from the ionosphere. It consists of several layers of charged particles ranging in altitude from 30- 250 miles above the surface of the earth. Such a travel of the wave from transmitter to the ionosphere and from there to the receiver on Earth is known as Sky Wave Propagation. Ionosphere is the ionized layer around the Earth’s atmosphere, which is suitable for sky wave propagation.