In the process of propagation of a wave, there are few terms which we come across quite often. Let us discuss about these terms one by one.

When a wave is refracted, it is bent down gradually, but not sharply. However, the path of incident wave and reflected wave are same if it is reflected from a surface located at a greater height of this layer. Such a greater height is termed as virtual height. 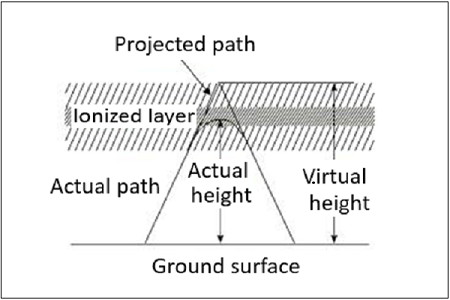 Critical frequency for a layer determines the highest frequency that will be returned down to the earth by that layer, after having been beamed by the transmitter, straight up into the sky.

The rate of ionization density, when changed conveninetly through the layers, the wave will be bent downwards. The maximum frequency that gets bent and reaches the receiver station with minimum attenuation, can be termed as critical frequency. This is denoted by fc.

For the frequencies above 30 MHz, the sky wave propagation exists. Signal multipath is the common problem for the propagation of electromagnetic waves going through Sky wave. The wave, which is reflected from the ionosphere, can be called as a hop or skip. There can be a number of hops for the signal as it may move back and forth from the ionosphere and earth surface many times. Such a movement of signal can be termed as multipath.

The above figure shows an example of multi-path propagation. Multipath propagation is a term, which describes the multiple paths a signal travels to reach the destination. These paths include a number of hops. The paths may be the results of reflection, refraction or even diffraction. Finally, when the signal from such different paths gets to the receiver, it carries propagation delay, additional noise, phase differences etc., which decrease the quality of the received output.

The decrease in the quality of the signal can be termed as fading. This happens because of atmospheric effects or reflections due to multipath.

Fading refers to the variation of the signal strength with respect to time/distance. It is widely prevalent in wireless transmissions. The most common causes of fading in the wireless environment are multipath propagation and mobility (of objects as well as the communicating devices).

The measurable distance on the surface of the Earth from transmitter to receiver, where the signal reflected from the ionosphere can reach the receiver with minimum hops or skips, is known as skip distance.

The frequency, which is being used mostly for a particular transmission and which has been predicted to be used over a particular period of time, over a path, is termed as Optimum Working Frequency (OWF).

Inter symbol interference (ISI) occurs more commonly in communication system. This is the main reason for signal multipath also. When signals arrive at the receiving stations via different propagation paths, they cancel out each other, which is known as the phenomenon of signal fading. Here, it should be remembered that the signals cancel out themselves in vector way.

Electromagnetic waves are not suitable for underwater propagations. However, they can propagate under water provided we make the frequency of propagation extremely low. The attenuation of electromagnetic waves under water is expressed in terms of skin depth. Skin depth is defined as the distance at which the signal is attenuated by 1/e. It is a measure of depth to which an EM wave can penetrate. Skin depth is represented as δ (delta).

At a height of around 50 mts from the troposphere, a phenomenon exists; the temperature increases with the height. In this region of troposphere, the higher frequencies or microwave frequencies tend to refract back into the Earth’s atmosphere, instead of shooting into ionosphere, to reflect. These waves propagate around the curvature of the earth even up to a distance of 1000km.

This refraction goes on continuing in this region of troposphere. This can be termed as Super refraction or Duct propagation.

We have discussed the important parameters, which we come across in wave propagation. The waves of higher frequencies are transmitted and received using this wave propagation technique.