The antenna array in its simplest form, having a number of elements of equal size, equally spaced along a straight line or axis, forming collinear points, with all dipoles in the same phase, from the same source together form the broad side array.

The frequency range, in which the collinear array antennas operate is around 30 MHz to 3GHz which belong to the VHF and UHF bands.

The following diagram shows the broad side array, in front view and side view, respectively.

The broad side array is strongly directional at right angles to the plane of the array. However, the radiation in the plane will be very less because of the cancellation in the direction joining the center.

The figure of broad side array with λ/4 spacing is shown below. 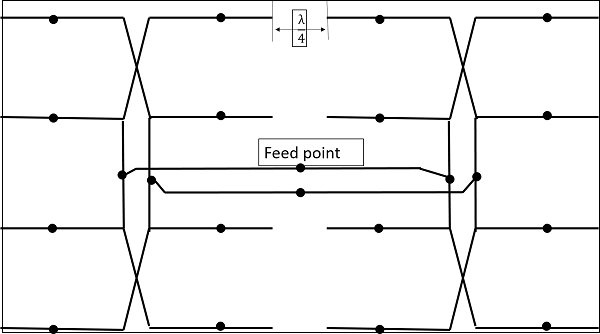 Typical antenna lengths in the broad side array are from 2 to 10 wavelengths. Typical spacings are λ/2 or λ. The feed points of the dipoles are joined as shown in the figure.

The radiation pattern of this antenna is bi-directional and right angles to the plane. The beam is very narrow with high gain. 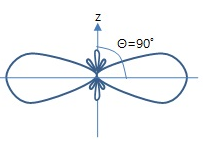 The above figure shows the radiation pattern of the broad side array. The beam is a bit wider and minor lobes are much reduced in this.