Antenna Theory - Lonosphere and its Layers

Earth’s atmosphere has several layers. These layers play an important role in the wireless communication. These are mainly classified into three layers.

This is the layer of the earth, which lies just above the ground. We, the flora and fauna live in this layer. The ground wave propagation and LOS propagation take place here.

This is the upper layer of the Earth’s atmosphere, where ionization is appreciable. The energy radiated by the Sun, not only heats this region, but also produces positive and negative ions. Since the Sun constantly radiates UV rays and air pressure is low, this layer encourages ionization of particles.

The layers of ionosphere can be studied from the following figure. 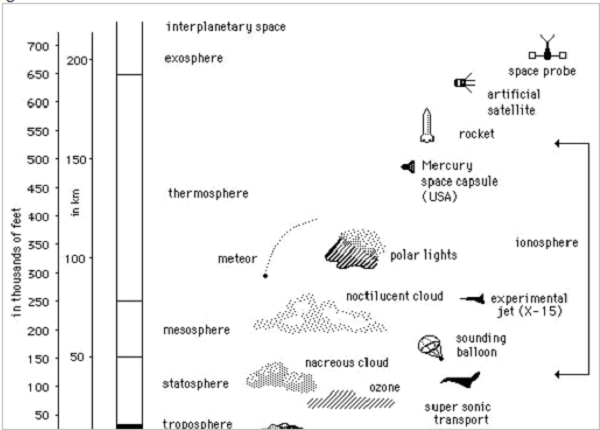 The number of layers, their heights, the amount of sky wave that can be bent will vary from day to day, month to month and year to year. For each such layer, there is a frequency, above which if the wave is sent upward vertically, it penetrates through the layer.

The function of these layers depends upon the time of the day, i.e., day time and night time. There are three principal layers- E, F1 and F2 during day time. There is another layer called D layer, which lies below E layer. This layer is at 50 to 90kms above the troposphere.

The following figure depicts the layers present in both day time and night time in the earth’s atmosphere.

This D layer is responsible for the day time attenuation of HF waves. During night time, this D layer almost vanishes out and the F1 and F2 layers combine together to form F layer. Hence, there are only two layers E and F present at the night time.