An RF current carrying coil is given a single turn into a loop, can be used as an antenna called as loop antenna. The currents through this loop antenna will be in phase. The magnetic field will be perpendicular to the whole loop carrying the current.

The frequency range of operation of loop antenna is around 300MHz to 3GHz. This antenna works in UHF range.

A loop antenna is a coil carrying radio frequency current. It may be in any shape such as circular, rectangular, triangular, square or hexagonal according to the designer’s convenience.

Loop antennas are of two types.

Large loop antennas are also called as resonant antennas. They have high radiation efficiency. These antennas have length nearly equal to the intended wavelength.

The main parameter of this antenna is its perimeter length, which is about a wavelength and should be an enclosed loop. It is not a good idea to meander the loop so as to reduce the size, as that increases capacitive effects and results in low efficiency.

These antennas are of the size of one-tenth of the wavelength.

The features of small loop antennas are −

Due to its high reactance, its impedance is difficult to match with the transmitter. If loop antenna have to act as transmitting antenna, then this impedance mis-match would definitely be a problem. Hence, these loop antennas are better operated as receiver antennas.

These two types of loop antennas are mostly widely used. Other types (rectangular, delta, elliptical etc.) are also made according to the designer specifications. 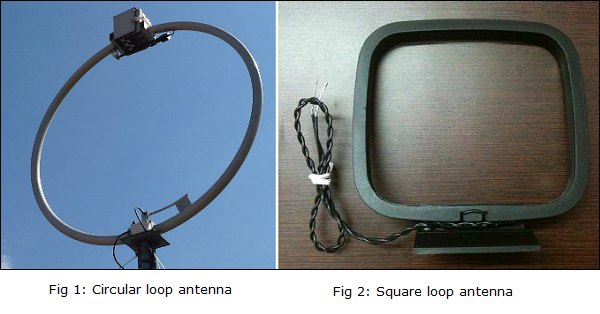 The above images show circular and square loop antennas. These types of antennas are mostly used as AM receivers because of high Signal-to-noise ratio. They are also easily tunable at the Q-tank circuit in radio receivers.

The radiation pattern of these antennas will be same as that of short horizontal dipole antenna. 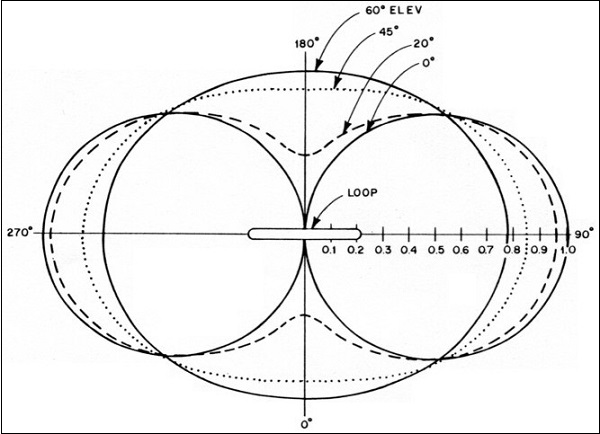 The following are the advantages of Loop antenna −

The following are the disadvantages of Loop antenna −

The following are the applications of Loop antenna −