The frequency range of usage of lens antenna starts at 1000 MHz but its use is greater at 3000 MHz and above.

To have a better understanding of the lens antenna, the working principle of a lens has to be known. A normal glass lens works on the principle of refraction.

If a light source is assumed to be present at a focal point of a lens, which is at a focal distance from the lens, then the rays get through the lens as collimated or parallel rays on the plane wavefront.

The same procedure gets reversed if a light beam is sent from right side to left of the same lens. Then the beam gets refracted and meets at a point called focal point, at a focal distance from the lens. This phenomenon is called convergence.

The same can be better understood by observing the following diagram − 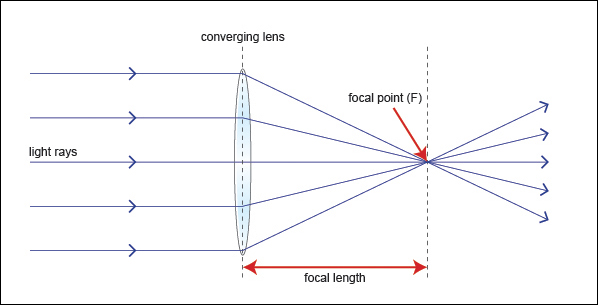 The ray diagram represents the focal point and focal length from the source to the lens. The parallel rays obtained are also called as collimated rays.

In the above figure, the source at the focal point, at a focal distance from the lens, gets collimated in the plane wave front. This phenomenon can be reversed which means the light if sent from the left side, gets converged at the right side of the lens.

It is because of this reciprocity, the lens can be used as an antenna, as the same phenomenon helps in utilizing the same antenna for both transmission and reception. 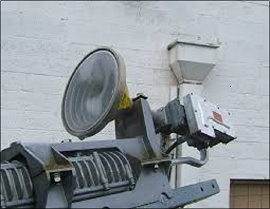 The image of the model of a lens antenna is shown.

To achieve the focusing properties at higher frequencies, the refractive index should be less than unity. Whatever may be the refractive index, the purpose of lens is to straighten the waveform. Based on this, the E-plane and H-plane lens are developed, which also delay or speed up the wave front.

The following types of Lens Antennas are available −

The following are the advantages of Lens antenna −

The following are the disadvantages of Lens antenna −

The following are the applications of Lens antenna −

The converging properties of lens antennas can be used for developing higher level of antennas known as Parabolic reflector antennas, which are widely used in satellite communications. We will discuss about them in the next chapter.