A short dipole is a simple wire antenna. One end of it is open-circuited and the other end is fed with AC source. This dipole got its name because of its length.

The range of frequency in which short dipole operates is around 3KHz to 30MHz. This is mostly used in low frequency receivers.

The Short dipole is the dipole antenna having the length of its wire shorter than the wavelength. A voltage source is connected at one end while a dipole shape is made, i.e., the lines are terminated at the other end. 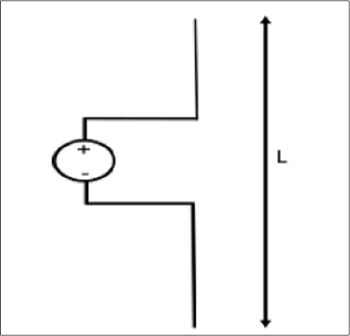 The circuit diagram of a short dipole with length L is shown. The actual size of the antenna does not matter. The wire that leads to the antenna must be less than one-tenth of the wavelength. That is

Another type of short dipole is infinitesimal dipole, whose length is far less than its wave length. Its constructiion is similar to it, but uses a capacitor plate.

A dipole whose length is far less than wavelength is infitesimal dipole. This antenna is actually impractical. Here, the length of the dipole is less than even fiftith part of the wavelength.

The length of the dipole, Δl << λ. Where, λ is the wavelength.

Hence, this is the infinitely small dipole, as the name implies.

As the length of these dipoles is very small, the current flow in the wire will be dI. These wires are generally used with capacitor plates on both sides, where low mutual coupling is needed. Because of the capacitor plates, we can say that uniform distribution of current is present. Hence the current is not zero here.

The following figure shows the radiation pattern of a short dipole antenna, which is in omni-directional pattern.

The following are the advantages of short dipole antenna −

The following are the disadvantages of short dipole antenna −

The following are the applications of short dipole antenna −

In this chapter, the popular and most widely used short-wire antennas were discussed. We will discuss the Long-wire antennas in the coming chapters.