The process of suppressing one of the sidebands along with the carrier and transmitting a single sideband is called as Single Sideband Suppressed Carrier system or simply SSBSC. It is plotted as shown in the following figure. 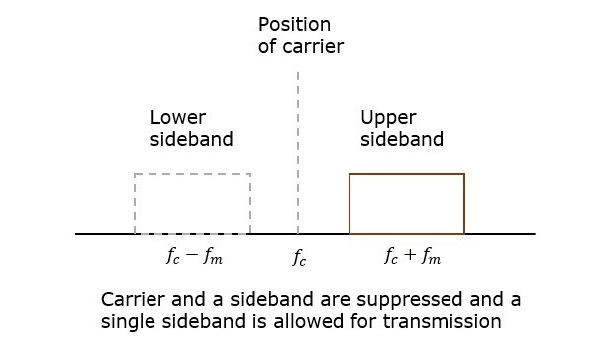 This SSBSC system, which transmits a single sideband has high power, as the power allotted for both the carrier and the other sideband is utilized in transmitting this Single Sideband.

Let us consider the same mathematical expressions for the modulating and the carrier signals as we have considered in the earlier chapters.

Mathematically, we can represent the equation of SSBSC wave as

Therefore, the bandwidth of SSBSC modulated wave is $f_m$ and it is equal to the frequency of the modulating signal.

Power of SSBSC wave is equal to the power of any one sideband frequency components.

In this case, the power of the upper sideband is

Similarly, we will get the lower sideband power same as that of the upper side band power.

Therefore, the power of SSBSC wave is