The process of converting continuous time signals into equivalent discrete time signals, can be termed as Sampling. A certain instant of data is continually sampled in the sampling process. 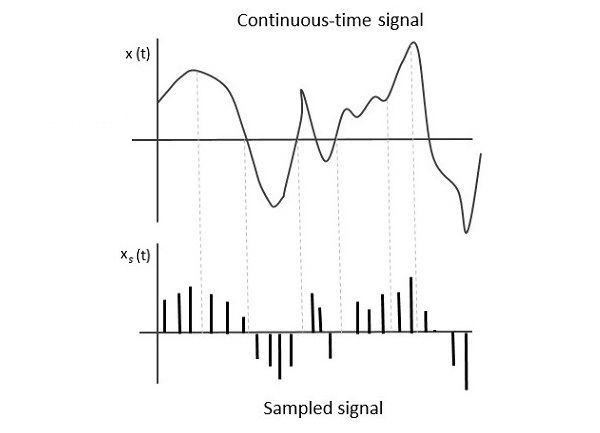 Mathematically, we can write it as

$T_s$ is the sampling period

The sampling rate should be such that the data in the message signal should neither be lost nor it should get over-lapped. The sampling theorem states that, “a signal can be exactly reproduced if it is sampled at the rate $f_s$, which is greater than or equal to twice the maximum frequency of the given signal W.”

Mathematically, we can write it as

If the sampling rate is equal to twice the maximum frequency of the given signal W, then it is called as Nyquist rate.

For continuous-time signal x(t), which is band-limited in the frequency domain is represented as shown in the following figure.

If the signal is sampled above Nyquist rate, then the original signal can be recovered. The following figure explains a signal, if sampled at a higher rate than 2w in the frequency domain.

If the same signal is sampled at a rate less than 2w, then the sampled signal would look like the following figure.

In this case, the signal can be recovered without any loss. Hence, this is a good sampling rate.