For a signal to be transmitted to a distance, without the effect of any external interferences or noise addition and without getting faded away, it has to undergo a process called as Modulation. It improves the strength of the signal without disturbing the parameters of the original signal.

A message carrying a signal has to get transmitted over a distance and for it to establish a reliable communication, it needs to take the help of a high frequency signal which should not affect the original characteristics of the message signal.

Modulation is the process of changing the parameters of the carrier signal, in accordance with the instantaneous values of the modulating signal.

Baseband signals are incompatible for direct transmission. For such a signal, to travel longer distances, its strength has to be increased by modulating with a high frequency carrier wave, which doesn’t affect the parameters of the modulating signal.

The antenna used for transmission, had to be very large, if modulation was not introduced. The range of communication gets limited as the wave cannot travel a distance without getting distorted.

Following are some of the advantages for implementing modulation in the communication systems.

Signals in the Modulation Process

Following are the three types of signals in the modulation process.

The signal which contains a message to be transmitted, is called as a message signal. It is a baseband signal, which has to undergo the process of modulation, to get transmitted. Hence, it is also called as the modulating signal.

The high frequency signal, which has a certain amplitude, frequency and phase but contains no information is called as a carrier signal. It is an empty signal and is used to carry the signal to the receiver after modulation.

The resultant signal after the process of modulation is called as a modulated signal. This signal is a combination of modulating signal and carrier signal.

There are many types of modulations. Depending upon the modulation techniques used, they are classified as shown in the following figure. 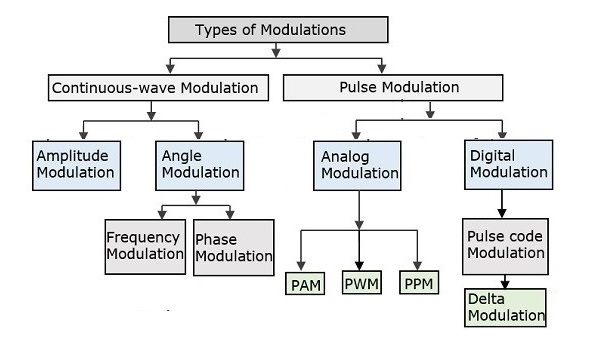 The types of modulations are broadly classified into continuous-wave modulation and pulse modulation.

In continuous-wave modulation, a high frequency sine wave is used as a carrier wave. This is further divided into amplitude and angle modulation.

In Pulse modulation, a periodic sequence of rectangular pulses, is used as a carrier wave. This is further divided into analog and digital modulation.

In analog modulation technique, if the amplitude or duration or position of a pulse is varied in accordance with the instantaneous values of the baseband modulating signal, then such a technique is called as Pulse Amplitude Modulation (PAM) or Pulse Duration/Width Modulation (PDM/PWM), or Pulse Position Modulation (PPM).