The types of amplifiers that we have discussed so far cannot work effectively at radio frequencies, even though they are good at audio frequencies. Also, the gain of these amplifiers is such that it will not vary according to the frequency of the signal, over a wide range. This allows the amplification of the signal equally well over a range of frequencies and does not permit the selection of particular desired frequency while rejecting the other frequencies.

So, there occurs a need for a circuit which can select as well as amplify. So, an amplifier circuit along with a selection, such as a tuned circuit makes a Tuned amplifier.

What is a Tuned Amplifier?

Tuned amplifiers are the amplifiers that are employed for the purpose of tuning. Tuning means selecting. Among a set of frequencies available, if there occurs a need to select a particular frequency, while rejecting all other frequencies, such a process is called Selection. This selection is done by using a circuit called as Tuned circuit. 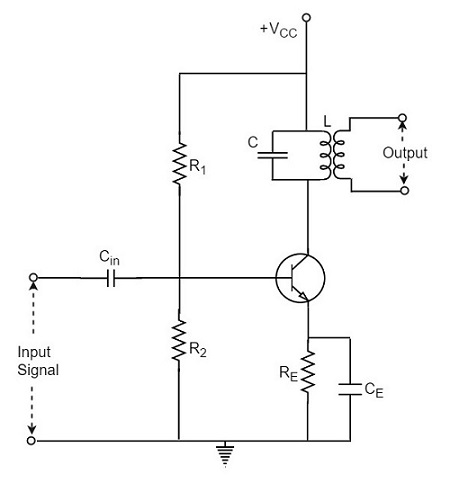 The tuner circuit is nothing but a LC circuit which is also called as resonant or tank circuit. It selects the frequency. A tuned circuit is capable of amplifying a signal over a narrow band of frequencies that are centered at resonant frequency.

The formula for resonance is

The inductor and capacitor connected in series make a series tuned circuit, as shown in the following circuit diagram.

The inductor and capacitor connected in parallel make a parallel tuned circuit, as shown in the below figure. 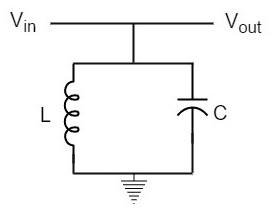 Characteristics of a Parallel Tuned Circuit

The frequency at which parallel resonance occurs (i.e. reactive component of circuit current becomes zero) is called the resonant frequency fr. The main characteristics of a tuned circuit are as follows.

The ratio of supply voltage to the line current is the impedance of the tuned circuit. Impedance offered by LC circuit is given by

At resonance, the line current increases while the impedance decreases.

The below figure represents the impedance curve of a parallel resonance circuit. 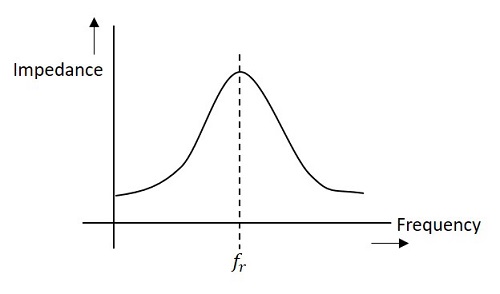 Impedance of the circuit decreases for the values above and below the resonant frequency fr. Hence the selection of a particular frequency and rejection of other frequencies is possible.

To obtain an equation for the circuit impedance, let us consider

Thus at parallel resonance, the circuit impedance is equal to L/CR.

At parallel resonance, the circuit or line current I is given by the applied voltage divided by the circuit impedance Zr i.e.,

Because Zr is very high, the line current I will be very small.

The ratio of inductive reactance of the coil at resonance to its resistance is known as Quality factor. It is denoted by Q.

The higher the value of Q, the sharper the resonance curve and the better the selectivity will be.

The following are the advantages of tuned amplifiers.

It is important to remember that these advantages are not applicable when there is a high resistive collector load.

For an amplifier to be efficient, its gain should be high. This voltage gain depends upon β, input impedance and collector load. The collector load in a tuned amplifier is a tuned circuit.

The voltage gain of such an amplifier is given by

Where ZC = effective collector load and Zin = input impedance of the amplifier.

The range of frequencies at which the voltage gain of the tuned amplifier falls to 70.7% of the maximum gain is called its Bandwidth.

The figure below details the bandwidth and frequency response of the tuned amplifier. 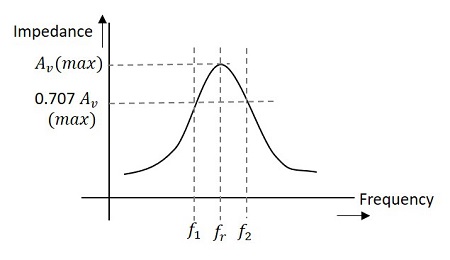 Relation between Q and Bandwidth

The quality factor Q of the bandwidth is defined as the ratio of resonant frequency to bandwidth, i.e.,

In general, a practical circuit has its Q value greater than 10.

Under this condition, the resonant frequency at parallel resonance is given by