When a line is drawn joining the saturation and cut off points, such a line can be called as Load line. This line, when drawn over the output characteristic curve, makes contact at a point called as Operating point.

This operating point is also called as quiescent point or simply Q-point. There can be many such intersecting points, but the Q-point is selected in such a way that irrespective of AC signal swing, the transistor remains in the active region.

The following graph shows how to represent the operating point. 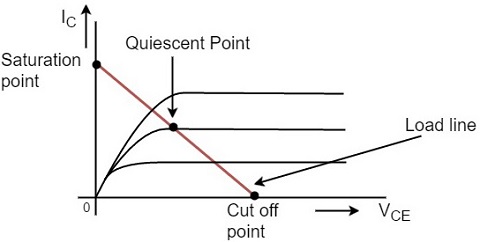 The operating point should not get disturbed as it should remain stable to achieve faithful amplification. Hence the quiescent point or Q-point is the value where the Faithful Amplification is achieved.

Faithful amplification is the process of obtaining complete portions of input signal by increasing the signal strength. This is done when AC signal is applied at its input. 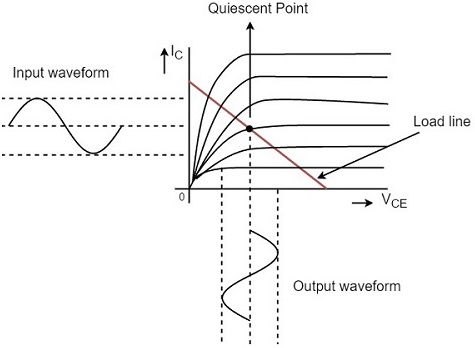 In the above graph, the input signal applied is completely amplified and reproduced without any losses. This can be understood as Faithful Amplification.

The operating point is so chosen such that it lies in the active region and it helps in the reproduction of complete signal without any loss.

If the operating point is considered near saturation point, then the amplification will be as under. 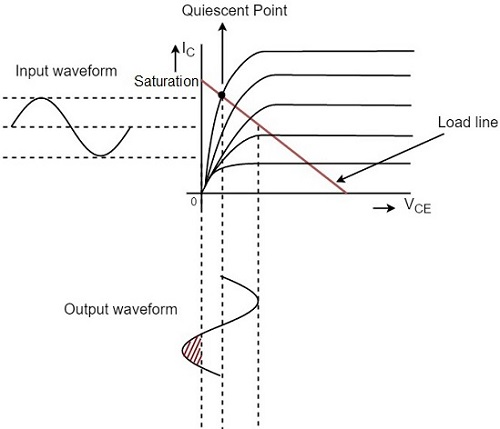 If the operation point is considered near cut off point, then the amplification will be as under. 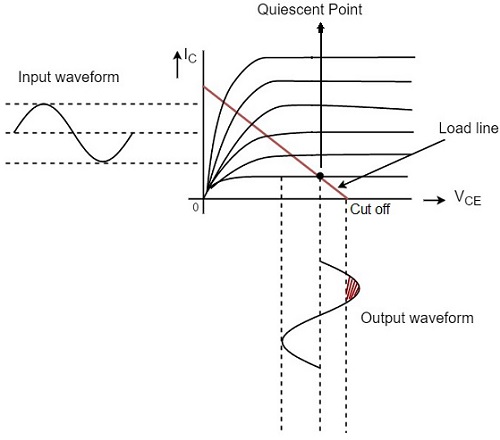 The amplified signal thus contains the same information as in the input signal whereas the strength of the signal is increased.

To ensure faithful amplification, the following basic conditions must be satisfied.

The fulfillment of these conditions ensures that the transistor works over the active region having input forward biased and output reverse biased.

For negative half cycle, the same junction gets reverse biased and hence the circuit doesn’t conduct. This leads to unfaithful amplification as shown in the figure below. 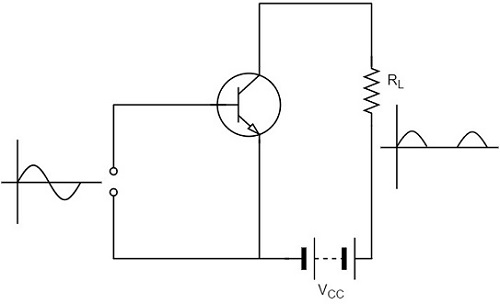 Let us now introduce a battery VBB in the base circuit. The magnitude of this voltage should be such that the base-emitter junction of the transistor should remain in forward biased, even for negative half cycle of input signal. When no input signal is applied, a DC current flows in the circuit, due to VBB. This is known as zero signal collector current IC. 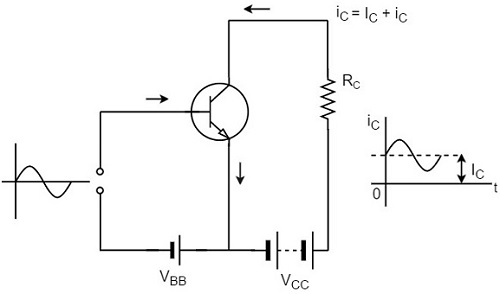 Proper Minimum VBE at any instant

The minimum base to emitter voltage VBE should be greater than the cut-in voltage for the junction to be forward biased. The minimum voltage needed for a silicon transistor to conduct is 0.7v and for a germanium transistor to conduct is 0.5v. If the base-emitter voltage VBE is greater than this voltage, the potential barrier is overcome and hence the base current and collector currents increase sharply.

Hence if VBE falls low for any part of the input signal, that part will be amplified to a lesser extent due to the resultant small collector current, which results in unfaithful amplification.

Proper Minimum VCE at any instant

To achieve a faithful amplification, the collector emitter voltage VCE should not fall below the cut-in voltage, which is called as Knee Voltage. If VCE is lesser than the knee voltage, the collector base junction will not be properly reverse biased. Then the collector cannot attract the electrons which are emitted by the emitter and they will flow towards base which increases the base current. Thus the value of β falls.