These are the circuits that implement compensation techniques using diodes to deal with biasing instability. The stabilization techniques refer to the use of resistive biasing circuits which permit IB to vary so as to keep IC relatively constant.

There are two types of diode compensation methods. They are −

Let us understand these two compensation methods in detail.

Diode Compensation for Instability due to VBE Variation

In a Silicon transistor, the changes in the value of VBE results in the changes in IC. A diode can be employed in the emitter circuit in order to compensate the variations in VBE or ICO. As the diode and transistor used are of same material, the voltage VD across the diode has same temperature coefficient as VBE of the transistor.

The following figure shows self-bias with stabilization and compensation. 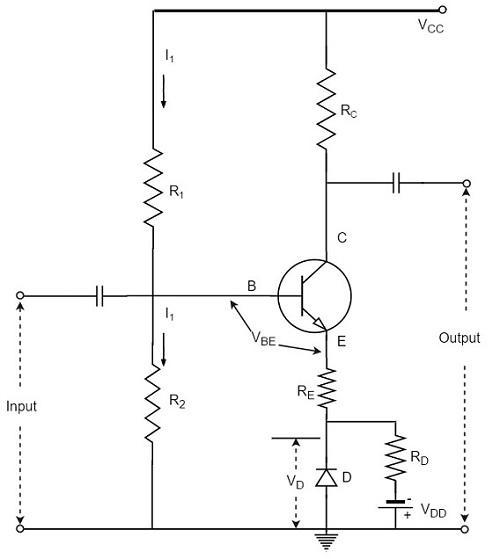 Diode Compensation for Instability due to ICO Variation

The following figure shows the circuit diagram of a transistor amplifier with diode D used for compensation of variation in ICO. 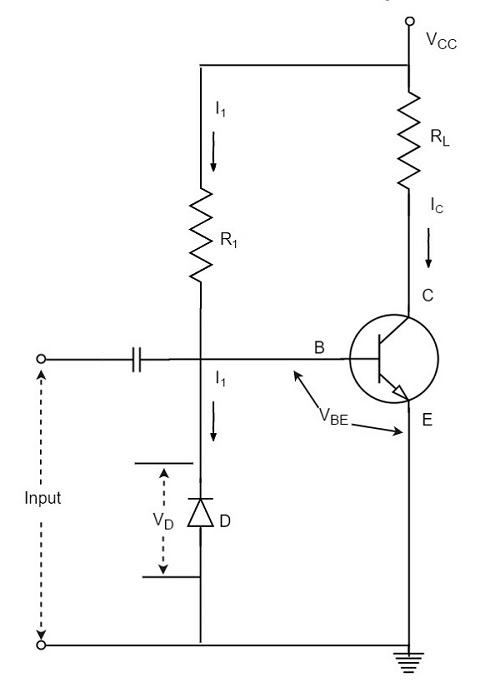 The diode D is reverse biased by VBE and the current through it is the reverse saturation current IO.

Now the base current is,

Substituting the above value in the expression for collector current.

I is almost constant and if IO of diode and ICO of transistor track each other over the operating temperature range, then IC remains constant.

There are other compensation techniques which refer to the use of temperature sensitive devices such as diodes, transistors, thermistors, Sensistors, etc. to compensate for the variation in currents.

There are two popular types of circuits in this method, one using a thermistor and the other using a Sensistor. Let us have a look at them. 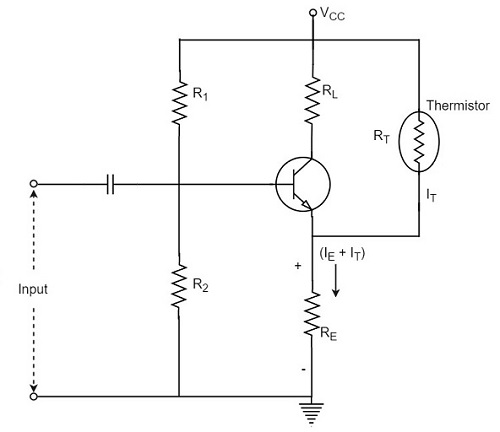 In an amplifier circuit, the changes that occur in ICO, VBE and β with temperature, increases the collector current. Thermistor is employed to minimize the increase in collector current. As the temperature increases, the resistance RT of thermistor decreases, which increases the current through it and the resistor RE. Now, the voltage developed across RE increases, which reverse biases the emitter junction. This reverse bias is so high that the effect of resistors R1 and R2 providing forward bias also gets reduced. This action reduces the rise in collector current.

Thus the temperature sensitivity of thermistor compensates the increase in collector current, occurred due to temperature. 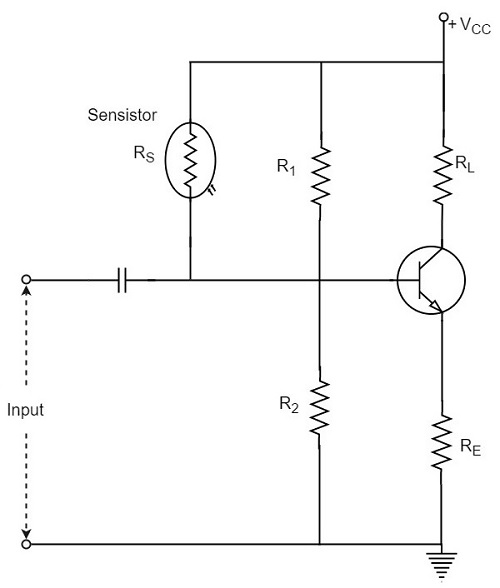 Hence by employing the Sensistor, the rise in the collector current which is caused by the increase of ICO, VBE and β due to temperature, gets controlled.

The transistor is a temperature dependent device. When the transistor is operated, the collector junction gets heavy flow of electrons and hence has much heat generated. This heat if increased further beyond the permissible limit, damages the junction and thus the transistor.

In order to protect itself from damage, the transistor dissipates heat from the junction to the transistor case and from there to the open air surrounding it.

And, the temperature of collector-base junction of the transistor = TJoC

As TJ > TA, the difference TJ - TA is greater than the power dissipated in the transistor PD will be greater. Thus,

Where H is the constant of proportionality, and is called as Thermal resistance.

Thermal resistance is the resistance to heat flow from junction to surrounding air. It is denoted by H.

The unit of H is oC/watt.

If the thermal resistance is low, the transfer of heat from the transistor into the air, will be easy. If the transistor case is larger, the heat dissipation will be better. This is achieved by the use of Heat sink.

The transistor that handle larger powers, dissipates more heat during operation. This heat if not dissipated properly, could damage the transistor. Hence the power transistors are generally mounted on large metal cases to provide a larger area to get the heat radiated that is generated during its operation. 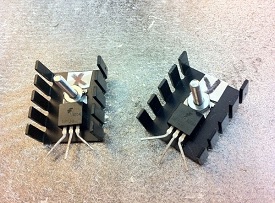 The metal sheet that helps to dissipate the additional heat from the transistor is known as the heat sink. The ability of a heat sink depends upon its material, volume, area, shape, contact between case and sink, and the movement of air around the sink.

The heat sink is selected after considering all these factors. The image shows a power transistor with a heat sink.

A tiny transistor in the above image is fixed to a larger metal sheet in order to dissipate its heat, so that the transistor doesn’t get damaged.

Heat sink is not the only consideration; other factors such as operating point, ambient temperature, and the type of transistor used can also cause thermal runaway.