The biasing of the transistor in class B operation is in such a way that at zero signal condition, there will be no collector current. The operating point is selected to be at collector cut off voltage. So, when the signal is applied, only the positive half cycle is amplified at the output.

The figure below shows the input and output waveforms during class B operation. 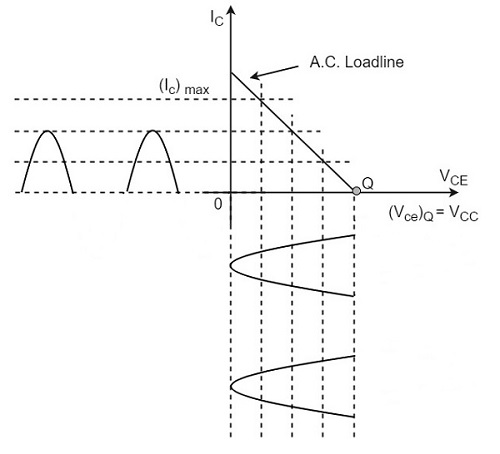 As the negative half cycle is completely absent, the signal distortion will be high. Also, when the applied signal increases, the power dissipation will be more. But when compared to class A power amplifier, the output efficiency is increased.

Well, in order to minimize the disadvantages and achieve low distortion, high efficiency and high output power, the push-pull configuration is used in this class B amplifier.

Though the efficiency of class B power amplifier is higher than class A, as only one half cycle of the input is used, the distortion is high. Also, the input power is not completely utilized. In order to compensate these problems, the push-pull configuration is introduced in class B amplifier.

The circuit of a push-pull class B power amplifier consists of two identical transistors T1 and T2 whose bases are connected to the secondary of the center-tapped input transformer Tr1. The emitters are shorted and the collectors are given the VCC supply through the primary of the output transformer Tr2. 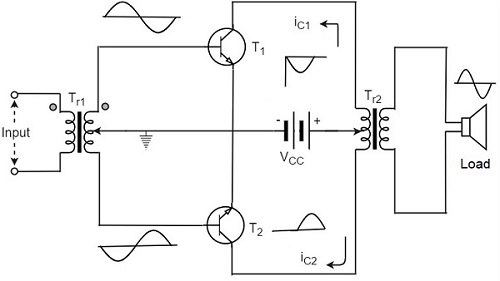 The circuit operation of class B push pull amplifier is detailed below.

The circuit of class B push-pull amplifier shown in the above figure clears that both the transformers are center-tapped. When no signal is applied at the input, the transistors T1 and T2 are in cut off condition and hence no collector currents flow. As no current is drawn from VCC, no power is wasted. 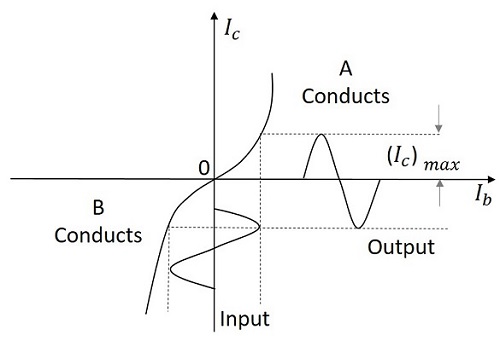 For the next half cycle, the transistor T1 gets into cut off condition and the transistor T2 gets into conduction, to contribute the output. Hence for both the cycles, each transistor conducts alternately. The output transformer Tr3 serves to join the two currents producing an almost undistorted output waveform.

The current in each transistor is the average value of half sine loop.

For half sine loop, Idc is given by

Here factor 2 is introduced as there are two transistors in push-pull amplifier.

Under ideal conditions of maximum power

The collector efficiency would be the same.

The push pull amplifier which was just discussed improves efficiency but the usage of center-tapped transformers makes the circuit bulky, heavy and costly. To make the circuit simple and to improve the efficiency, the transistors used can be complemented, as shown in the following circuit diagram. 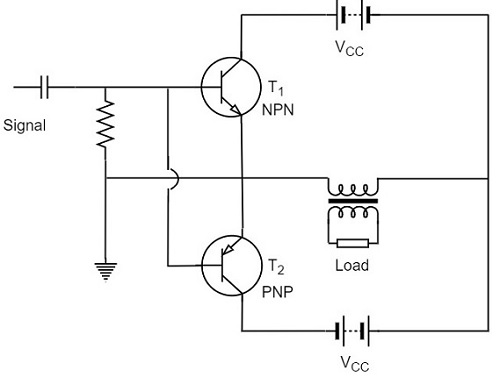 In this way, the NPN transistor amplifies during positive half cycle of the input, while PNP transistor amplifies during negative half cycle of the input. As the transistors are both complement to each other, yet act symmetrically while being connected in push pull configuration of class B, this circuit is termed as Complementary symmetry push pull class B amplifier.

The advantages of Complementary symmetry push pull class B amplifier are as follows.

The disadvantages of Complementary symmetry push pull class B amplifier are as follows.